CM Biren: Drugs and intoxicants had taken many lives, the Chief Minister said that there is need for a collective effort to uproot it. 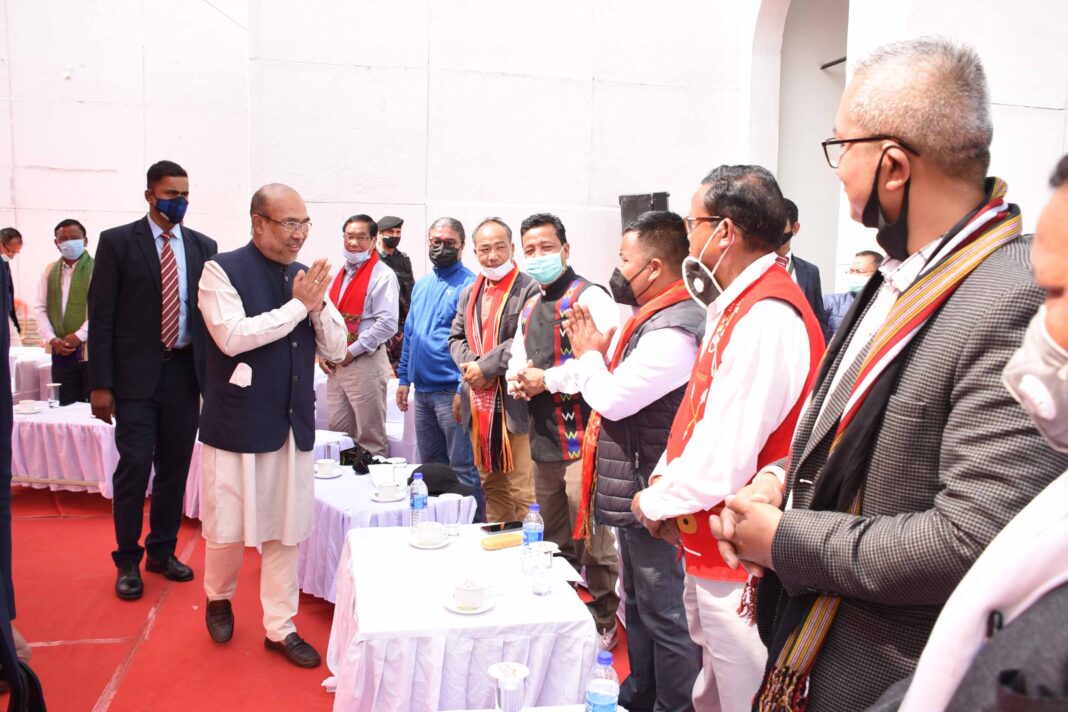 In what could be termed as a rare and historic occasion, representatives of 33 communities residing in the State took a collective pledge to work together towards complete destruction of illegal poppy cultivation and checking illicit drug businesses. The pledge was led by Manipur chief minister N Biren Singh. The event known as ‘All Communities Convention for a Pledge Against Illegal Poppy Plantation’ was organized at Bhagyachandra Open Air Theatre (BOAT) by Meitei Leepun in association with the apex bodies of these 33 communities under the supervision of the Chief Minister. The convention was held after people responded to the Chief Minister’s call to extend support and co-operation to ‘War on Drugs’ campaign by taking part in the destruction of poppy cultivations.

The pledge that was administered to the gathering by MBC Pastor Rev. Zuankanmang Daimei was: “Onwards from this day, the 25th of February 2021, in the presence of Almighty God and our beloved and visionary leader Shri N. Biren Singh, our Hon’ble Chief Minister, we solemnly pledge that we will support and contribute our best efforts to transform the War on Drugs to a people’s war. We further pledge we shall work for completely eradicating illegal poppy cultivation and other illicit drug businesses in any areas of our jurisdiction by any person from within or outside”.

It is said that some participants left their villages on February 23 to reach Imphal on Thursday to take part in the convention. Volunteers of Royal Riders Manipur received the participants at different locations. Those who came from Senapati and Kangpokpi were received at Sekmai, Tamenglong and Noney at Khuman Lampak, Chandel and Tengnoupal at Thoubal, Ukhrul at Lamlai, Churachandpur and Pherzawl at Nambol Chingmang. They were escorted up to BOAT by RRM volunteers.

Speaking on the occasion, the Chief Minister said that he was moved by the people’s overwhelming response to his appeal for a collective fight against drugs and poppy plantation. He said that the convention was a historic event and it would be remembered forever. When he was elected to the Manipur Legislative Assembly for the first time in 2002, the Chief Minister said that he moved a Private Member Resolution to forgive and forget the past mistakes and live together harmoniously by all the communities of the State. After he became the Chief Minister as well, N. Biren contended, ‘Go to Hills’ to bring equal opportunities and development was his first slogan.

Maintaining that drugs and intoxicants had taken many lives, the Chief Minister said that there is need for a collective effort to uproot it. N. Biren Singh assured that the Government would definitely give alternative livelihood to all the poppy growers. For this, the Chief Minister informed, required funds had been earmarked in the Budget and additional assistance would also be sought from the Centre. Needy poppy growers would be identified in consultation with the village chiefs to provide assistance through the DCs concerned under different Government schemes, he added.

The Chief Minister also had a candid interaction with the community leaders after the convention.