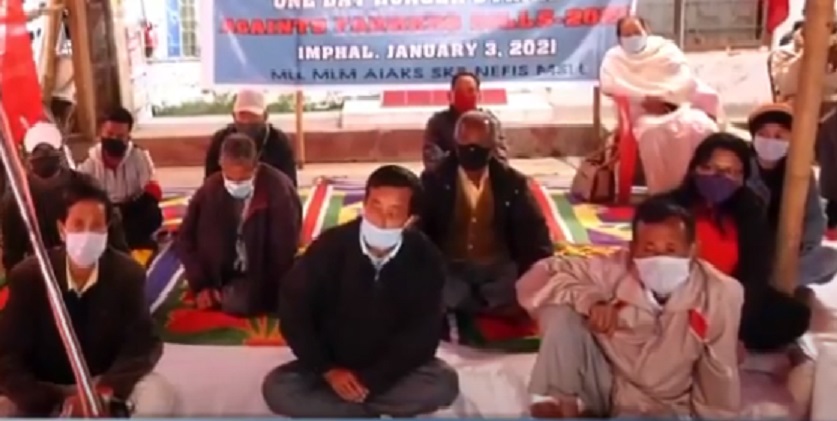 Members of the Left wing’s peasants’ organisations on Sunday staged a one-day hunger strike in Imphal against three farm laws passed by the Parliament in September last year.

Representatives of North East Forum of International Solidarity (NEFIS) also joined the protest that was staged in solidarity to the agitating farmers from different parts of the country.

During the protest, leaders of the peasants’ bodies announced that they would extend their support to the farmers of the country currently staging protests at the border areas of the national capital, New Delhi. Different forms of protests will be launched in the state too until and unless the three laws are scraped, they added.

Talking to reporters at the protest site, secretary Haobijam Ibobi of MLL announced that peasants of the state are ready to launch a series of protests against the three laws.

He claimed that none of the peasants in the state will accept the laws which were first promulgated as ordinance in June 2020 before the bills were passed without any discussion in the house of the Parliament.

He alleged that the BJP-led NDA government had passed the three farm laws taking advantage of majority in the Parliament.

He said that the laws were passed not in the interest of the peasants of the country but for the benefits of the corporates.

“The new laws tantamount to snatch the rights of the peasants and the minimum support price which the peasants had been enjoying for decades”, he said.

MLM leader Sarat Salam while highlighting the protest of the farmers and peasants since August said that farmers of the country are now united with a strong determination to fight against the laws.

He alleged that more than 11 thousand peasants committed suicide during the year 2019. A young farmer had recently committed suicide in Madhya Pradesh allegedly after unable to clear electricity bill following which his floor mill and motor cycle were confiscated.

While committing the suicide, he left a note addressed to the Prime Minister Narendra Modi, requesting him (Prime Minister) to sell his organs and clear the debts he owe.

Sarat then urged farmers and peasants of the state to extend their support by participating in the protest demanding repeal of the controversial laws.

The parliament of India passed three bills – The Farmers’ Produce Trade and Commerce (Promotion and Facilitation) Bill-2020, The Farmers (Empowerment and Protection) Agreement of Price Assurance and Farm Services Bill-2020 and The Essential Commodities (Amendment) Bill-2020 on September 14, 2020.
On September 27, 2020, the bills received the Presidential assent and were notified in the gazette.

It can also be noted here that as many as 31 farmers’ organisations are to fight collectively against these three new laws.

The protesting farmers described the three laws as “anti-farmer laws” while politicians from the opposition alleged that it would leave farmers at the “mercy of corporates”.