Can Italy upset the favourites and win the Euros this summer?

Two reasons why we think the Azzurri are real contenders for the Euro 2020 title this summer. 1. Exciting Attack Built on a Solid Defensive Base. 2. Playing without the weight of Expectations. 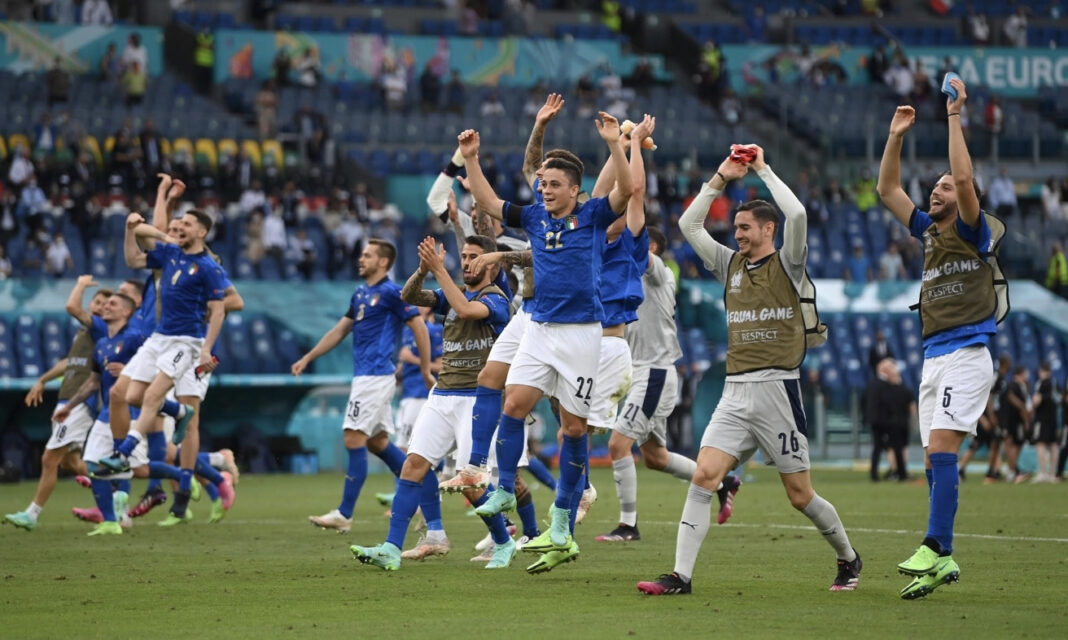 With four World Cup titles and one European Championship, the Italian National Team is one of the most successful national football teams in the world. In the recent past, however, the country has been underwhelming in major finals (World Cup and Euros) with their last sniff of silverware (or goldware) coming in their infamous World Cup win of 2006. The highly-rated team that succeeded the World Champions of 2006 could only finish second in the 2012 Euros where they were humiliated 4-0 by Champions Spain in the final. The country then hit a new low when they failed to qualify for the 2018 World Cup in Russia.

But ever since Roberto Mancini took over the reins in the summer of 2018, the Azzurri look as if they have turned a corner. Coming into this year’s European Championship in fine form, Italy has played some magnificent football in the first three group games so far. Yesterday’s 1-0 win over Wales with what was essentially their B team sealed their qualifications to the last 16 as winners of Group A. So, with a newfound spring in their steps and a dashing Mancini at the helm, can the Azzurri end their trophy barren run this summer?

Here are two reasons why we think the Azzurri are real contenders for the Euro 2020 title this summer.

Exciting Attack Built on a Solid Defensive Base

Italy has always been a team blessed with a plethora of talented defenders. As such, their approach to games has always been built on their defensive stability. Shades of that have been seen in the performances of the Italian side this summer too. The Azzurri have an unblemished record of three wins and three clean sheets from their group games so far. The 1-0 win over Wales was also the 11th consecutive match where the Azzurri have kept a clean sheet and the team has now gone over 1000 minutes without conceding a goal.

This, however, doesn’t mean the team has sat back in all the games and nicked matches with the odd goal. They have scored six goals in the three matches with an average of two goals a game and are an entertaining team to watch. The greatest compliment one can give Mancini at this point is how he’s built a cohesive attacking team on the foundations of a solid defensive base. Sir Alex Ferguson’s famous words, “Attack win you games, defence win you titles.” always seem to ring true whenever you see the Azzuri play this summer.

Playing without the weight of Expectations

The team that preceded this Euro Cup team was studded with some of the most famous names in world football. Right after their World Cup triumph in 2006, Italy was touted to dominate in the continental as well as the global front.  Andrea Pirlo, Fabio Cannavaro, Gianluigi Buffon, Mario Balotelli, De Rossi, Chiellini were all at the peak of their games and expectations weighted heavily on these players whenever they played in any major tournaments.

This summer, little hype surrounded the team as they played in a major tournament for the first time in five years. Playing without the weight of expectations, the team has comfortably made it to the round of 16. And even though their performances have merited a shout as one of the tournament favourites, the media continues to ignore their credentials. So, with nothing to lose but everything to gain, shining the limelight from the Azzurri may do them a world of good.