State would start opening up offices and shops very soon and only those people who hold vaccination certificates would be allowed to come out and buy or sell things activities. 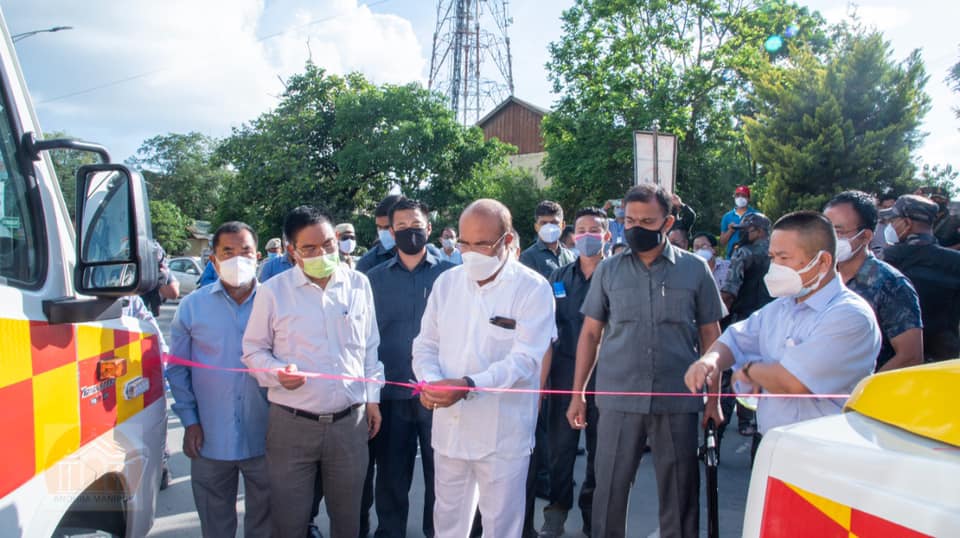 Accomplishing the State Government’s objective to provide three ambulances each to six Autonomous District Councils (ADCs) of the State, Chief Minister N Biren Singh on Saturday handed over remaining eight ambulances to the ADCs as the 2nd Phase.

The Chief Minister also said that only those people who hold vaccination certificates would be allowed to come out and buy or sell things once the State opens up.

The distribution programme which was organized by the Department of Tribal Affairs & Hills (TA & Hills) was held at the western gate of the Chief Minister’s Secretariat.

Speaking at the occasion, N Biren Singh stated that June 26 is observed all over the world as ‘International Day Against Drug Abuse and Illicit Trafficking’ and expressed serious concern that drug trafficking still continues even during this crucial hour of the COVID-19 pandemic.

However, he maintained that the State Government had been putting in tireless efforts to curb drug abuse and its trafficking since the commencement of its ‘War on Drugs’ campaign and further appreciated the sincere efforts of the State police, Narcotic and Border Affairs (NAB) and the support of the public in the Government’s fight to root out drug menace from the State.

He further stated that many voluntary organizations across the State including both hill and valley had come out and given support to the War on Drugs campaign and this had been of great help in curbing trafficking of drugs.

He also extended his gratitude to all the stakeholders for their positive response in destroying poppy plantations in many places and substituting it with other suitable plants.

He maintained that the Government would continue to take stringent action against drug traffickers and put all possible efforts to totally root out drug related activities from the State.

Regarding the second wave of COVID-19, N Biren informed that the recovery rate had significantly increased with around 4,000 patients recovered the previous day and added that the active cases have come down appreciably.

He further said that the State would start opening up offices and shops very soon and only those people who hold vaccination certificates would be allowed to come out and buy or sell things activities.

Pointing out that mass vaccination is the most vital measure to fight the pandemic successfully, many mobile teams had also been formed to vaccinate as many people as possible, he added.