UDWJA said that its members saluted Shaiza's courage in upholding and protecting "freedom of expression and true spirit of journalism" as he reached the unreached sections of the populace disseminating the message of truth during his time as a journalist. 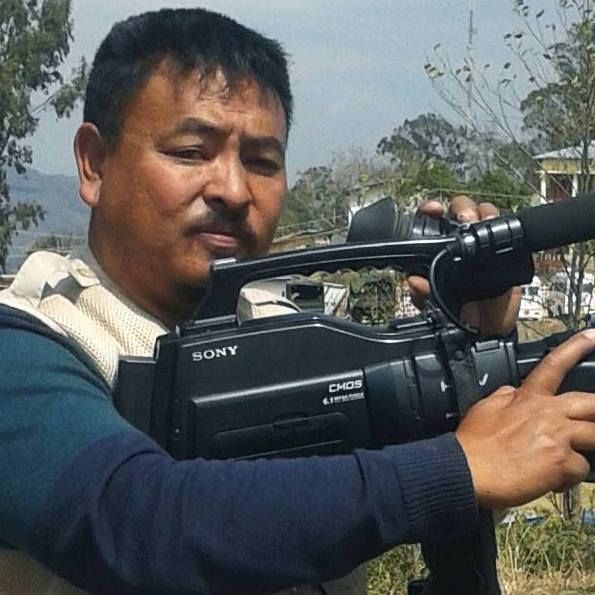 The Ukhrul District Working Journalists’ Association (UDWJA) Sunday expressed deep sadness and its profound condolences on the sudden and untimely demise of its advisor, former president and senior journalist, Thotshang Shaiza (52) who succumbed to Covid-19 complications at ICU of Jawaharlal Nehru Institute of Medical Sciences (JNIMS), Imphal late Saturday night around 10:40 pm. UDWJA grieved the loss of a brave and veteran journalist from the Tangkhul community.

The condolence message mentioned that Thotshang Shaiza joined journalism in 2009 and served the Ukhrul district’s press fraternity in varied capacities as its president for consecutive two terms from 2015-18 and 2018-21 and was incumbent Advisor. Shaiza was the district correspondent for ISTV and for The Aja Daily till he breathed his last.

UDWJA said that its members saluted Shaiza’s courage in upholding and protecting “freedom of expression and true spirit of journalism” as he reached the unreached sections of the populace disseminating the message of truth during his time as a journalist. It further added that Shaiza’s loss was irreparable for Ukhrul media fraternity and that he was an outspoken and fun loving gentleman and someone who strengthened the journalist association in Ukhrul district.

Manipur Hill Journalists’ Union stated the loss of Shaiza, a dedicated news reporter, a great loss for the family in particular and journalist union in general. “We could not stop the hands of death reaching for our comrades but hope that we will meet him again someday on the ‘other side of the river’. And, his contributions in dissemination of information to the masses and for the development of the press in our region shall remain forever,” MHJU President Ramkung Pamei who is also the President of Tamenglong District Working Journalists Union (TDWJU) said.

ADC Caretaker Chairman, Dr Yaronsho Ngalung expressed his sincere condolences, “We have lost a warrior among us. What a great lost to us. It will be difficult to fill the vaccum created by his demise. During his Presidentship of the Ukhrul Journalist Association, he has extended his fullest cooperation in whatever we do. I on my own behalf and on behalf of all former ADC Members express our deep condolences to the bereaved family members and relatives. May God give his beloved wife and childrens under His constant care and love. May God keep them strength, comfort and peace in these difficult times. May his soul rest in Eternal Peace.”

Tangkhul Naga Film Association (TNFA) stated that Shaiza’s invaluable contribution to Tangkhul film industry as the former Convener Censor Board and the void created by his demise will be deeply felt. His love for the community and the work he has left behind will remain a legacy for the younger generation, the association stated, adding that TNFA remain indebted to him in shaping the Tangkhul film industry for being approachable to both the young and the old. TNFA conveyed condolences to the bereaved family.

The Aja Daily founding Editor, Valley Rose expressed deep grieve at the loss of not just a colleague but a dear family member in their many years of working together for the lone Ukhrul local news paper. She mentioned the leading role he played in forming Ukhrul District Working Journalists’ Association and how deeply passionate Shaiza was about journalism. Valley Rose said that his demise is a great loss for the Tangkhul community and the work he has left behind will be irreplaceable.

Hunphun Ukhrul Village Authority (HUVA) stated that Shaiza was courageous and forthright as a member in rendering his services to the village. It said that Shaiza’s passing away is  a setback for the whole Tangkhul community and mourned with his bereaved family and prayed for his soul to rest in eternal peace.

Works minister Th Biswajit Singh expressed his heartfelt condolences on the untimely demise of Shaiza and stated that he played significant role in transmission of local news to general public and extended solidarity and initiatives taken up by Manipur Hills Journalists Union and added that his passing away is an irreparable loss to the journalistic fraternity.

Tangkhul Leisak Long (Trade & Commerce Council) stated that Shaiza played a significant role in the development and strengtehing of the council, as Action Convenor and more importantly as former President of the TLL. He was more than a member, a leader who actively participated and contributed with great passion towards betterment of the society and in Nation building, it said.

All Manipur Working Journalists’ Union (AMWJU) mentioned that senior journalist, Thotshang Shiaza was an integral member of AMWJU who had contributed richly to the the Union, adding that his demise leaves deep void and prayed for the bereaved family during these difficult times.

Ukhrul District Sports Association (UDSA) President, Alfred K Arthur, MLA Ukhrul in his condolence message expressed deepest sorrow and grief on the demise of Thotshang Shaiza adding that it was a great loss for UDSA, and mourned with the bereaved family.

Editors’ Guild Manipur, joined the media fraternity of Manipur in condoling the sudden demise of senior journalist Thotsang Shaiza. “We remember him as a very active and diligent journalist who worked to bring information from remote corners of the state to the mainstream both for the electronic media ISTV news and Tangkhul dialect daily The Aja Daily. His passing away will leave a void amongst the journalist fraternity of Manipur. May his soul rest in peace,” it said.