The MPCC staged the protest under the banner ‘Kishan Adhikar Diwas’. During the protest, they shouted various slogans against the BJP-led NDA government for passing and enacting the "anti-farmers laws". 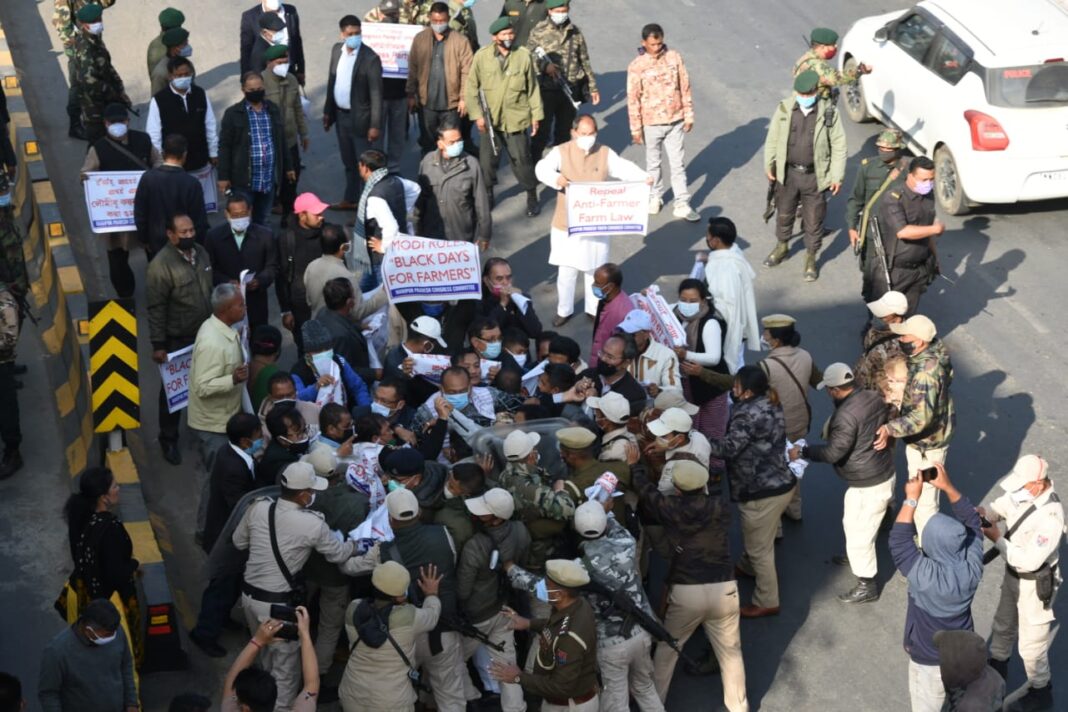 Hundreds of Congress workers, including its leaders, got into a brief scuffle with security forces on Friday after they were stopped from marching towards Raj Bhavan in Imphal. The Congress workers and leaders demanded immediate scrapping of the new farm laws.

The BJP-led NDA government at the Centre passed the three farm bills – The Farmers’ Produce Trade and Commerce (Promotion and Facilitation) Bill, 2020, the Farmers (Empowerment and Protection) Agreement of Price Assurance and Farm Services Bill, 2020, and the Essential Commodities (Amendment) Bill, 2020 during the last monsoon session of the Parliament.  Despite the strong protest from farmers and peasants across the country, the bills got the assent of the President of India.

Supporting the demand of the farmers and peasants to repeal the laws, a large number of Congress leaders and workers staged a sit-in-protest in Imphal’s Congress Bhavan in Imphal. While most of the leaders and workers were staging the protest, a group led by Manipur Pradesh Mahila Congress Committee president Mutum Sarma, Youth Congress president Mahananda and MPCC general secretary Hareshwar Goshwami went to meet the Governor.

Even after the Governor refused to meet the first team, a large number of Congress leaders and workers who were holding the sit-in-protest marched toward the Raj Bhavan. However, they were stopped by a strong team of police before reaching the Raj Bhavan gate. After a brief struggle, the police prevented them from further proceeding and forced them to go back to Congress Bhavan where the protesters continued their protest.

Apart from Manipur Pradesh Congress Committee (MPCC) president Govindas Konthoujam, opposition leader and former chief minister O Ibobi, CWC member Gaikhangam, sitting and ex-MLAs of the party, the protest was attended by a large number of workers and supporters of the party from various parts of the state.

The MPCC staged the protest under the banner ‘Kishan Adhikar Diwas’.

During the protest, they shouted various slogans against the BJP-led NDA government for passing and enacting the “anti-farmers laws”.

Former chief minister O Ibobi, talking to reporters, termed the three farm laws as “anti-farmers”, while alleging that the bills were passed by force, and without any discussion amid ruckus in Parliament. He demanded that the laws should be scrapped immediately as it was not passed in the interest of the farmers of the country.

“The laws will force the farmers to be dependent and leave them at the mercy of big corporates”, he observed.