Our mission is to build a society of peace and justice and egalitarian prosperity. 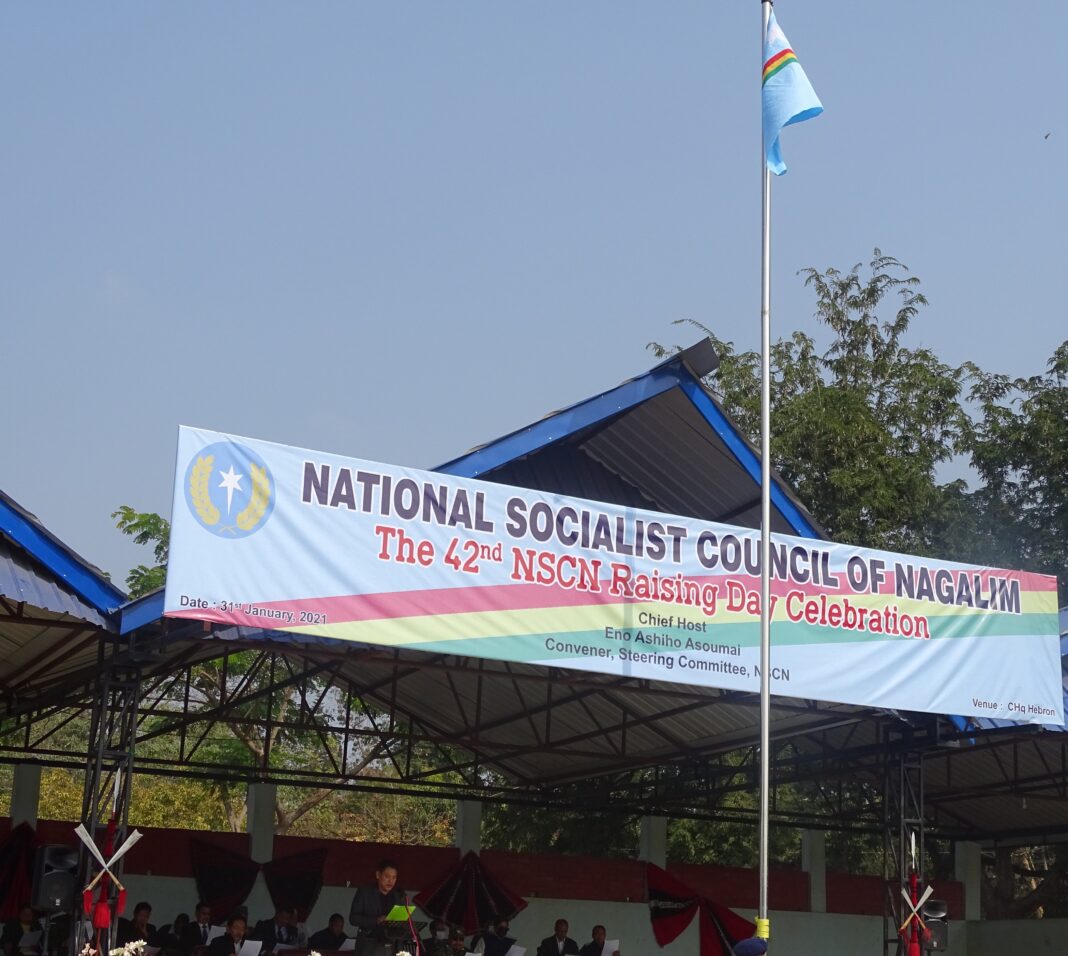 This was Q Tuccu’s 42nd NSCN Raising Day speech (on January 31) issued by the NSCN-IM publicity cell to the media on Sunday. The speech was read out at Camp Hebron by the convenor of the Steering Committee of the NSCN-IM, according to its publicity cell.

“My brothers and sisters, sons and daughters, allow me to say this, be on your guard, the Government of India is yet to get serious and honest with the Nagas vis-à-vis the ongoing political talk,” the speech said. “Nagas are being taken as if they are purchasable commercial commodities. But God forbids that things should go wrong in the peace process. The Government of India is expected to honor the lofty commitments given to us by the former Prime Ministers,” Q Tuccu added. He also said that reinforcing trust and confidence are the key words to crack the nut today. He added that Nagas have never and will never ever try to cause or help to cause disintegration of India. “We wish a prosperous and strong India but Nagas have no hesitation to say that the 16 Point Agreement was and is never the solution to the Indo-Naga problem,” Tuccu further added.

The NSCN-IM chairman then said that, ceasefire in the 60s followed by six rounds of talks at the Prime Minister level and again the present ongoing negotiations for the past 24 years initiated by Prime Minister P.V. Narasimha Rao and religiously pursued by other 5 Prime Ministers should not be denigrated at the “whims of certain small fries”. Tuccu further said that the political stand of the Nagas in the past vis-à-vis India was “nothing to do with India, but today since the Government of India and the NSCN have signed the Framework Agreement, that India and Nagalim shall enter a new relationship for peaceful co-existence of the two entities on the basis of shared sovereignty, meaning, Nagas are sovereign people, Nagas will abide by the principles of the Framework Agreement- nothing above and nothing below the Framework Agreement”, adding, “Only the principle of the Framework Agreement is the key to an honorable and acceptable solution for durable peace. Neither economic packages nor imposed political packages will bring about lasting solution”.

Tuccu then said, “My dear brothers and sisters, sons and daughters, most of our leaders who have founded the NSCN are no more with us as they have gone the way of our fathers”, adding, “But in their time they have done their best which amazes us and also inspires us”. He also said that their vision, spirit with solid integrity and passion will continue to lead Nagas till the ultimate day. He further said that formation of the NSCN was a call of history when the NNC had miserably failed to the Naga nation when Shillong Accord was signed in November 1975 by its delegation. He added that NNC had failed because they lost sight of the national goal and it did not walk in step with the people on the front. He also said that any leader who goes out of step with his people is bound to go out of step with God too and such a man ultimately ends up seeking convenience and safe zone. He added that this is a big lesson for “all of us” to keep it in mind.

According to Tuccu, there are disciplines, rules and regulations in all organizations. He further said that no man prospers without discipline. “The Bible says, a man who is not disciplined is like a palace with its wall broken down,” Tuccu said. “Again it says, no athlete wins a trophy unless he abides by the rules of the game. We are in an organization bound by its disciplines, rules and regulations. We should never compromise our ethos of leading by power of good example not by example of power. Our culture of mutual respect and sacrifices should be upheld with more vigor,” the NSCN-IM leader added.

According to Tuccu, NSCN-IM has its vision and mission. “As covenanted by God with our fathers, our vision is to not only liberate our people politically here on earth, but also prepare the highway of salvation for our people through the gospel of Jesus Christ,” he said, adding, “Therefore our mission is to build a society of peace and justice and egalitarian prosperity”.

He then stated that, at this “historical defining moment” NSCN-IM cadres should not allow themselves to be caught unprepared. “We must tighten our belt to face any eventuality,” he asserted.

Tuccu then said that Naga people, especially the National Socialist Council of Nagalim (NSCN), men and women, great and small are indeed grateful to God, the Jehovah, “and we give all Glory to Him”. He said that unless God sustained and preserved “us and protected our land with His might and wisdom our neighbors could have swallowed us to their hearty pleasure”. He added, “Thank God and thanks to our people too!”

The NSCN-IM chairman then “humbly” requested all cadres to join him in paying their highest respect to the “brave hearts” who had made their supreme sacrifices by embracing martyrdom in defence of “ourMotherland, our history, our people and our rights”. Tuccu said they have given up their personal freedom for the sake of “our freedom; they have laid down their right to live so that our right to live cannot be questioned. They have died the undignified death so that we may live with dignity: they have shed their tears, sweat and even blood to its last drop for this land of God’s covenant”.

Tuccu then said that every spring or every brook that flows in Nagalim is now flowing with elements of Nagas’ blood, tears and sweats. He further said that the beautiful land, a part of God’s creation now swarms with widows and orphans. He added that cries and wailings are heard from nooks and corners of Nagalim day-in and day-out, year-in and year-out. “But the adversaries are yet to give it any damn. No compunction! Not at all! The people, who are proud of their civilization of 5000 years, preach peace and ahimsa at the top of their voice across the globe but keep using force armed with most draconian laws with impunity for more than sixty (60) years against the Nagas”.

He then said, “Because of the fact that Nagalim has never been integral part of India, it has been held under forced occupation with martial law of AFSPA from the fifties till date,”, adding, “Wait and watch God will surely visit them in His own time: it is just a matter of time – sooner or later”.