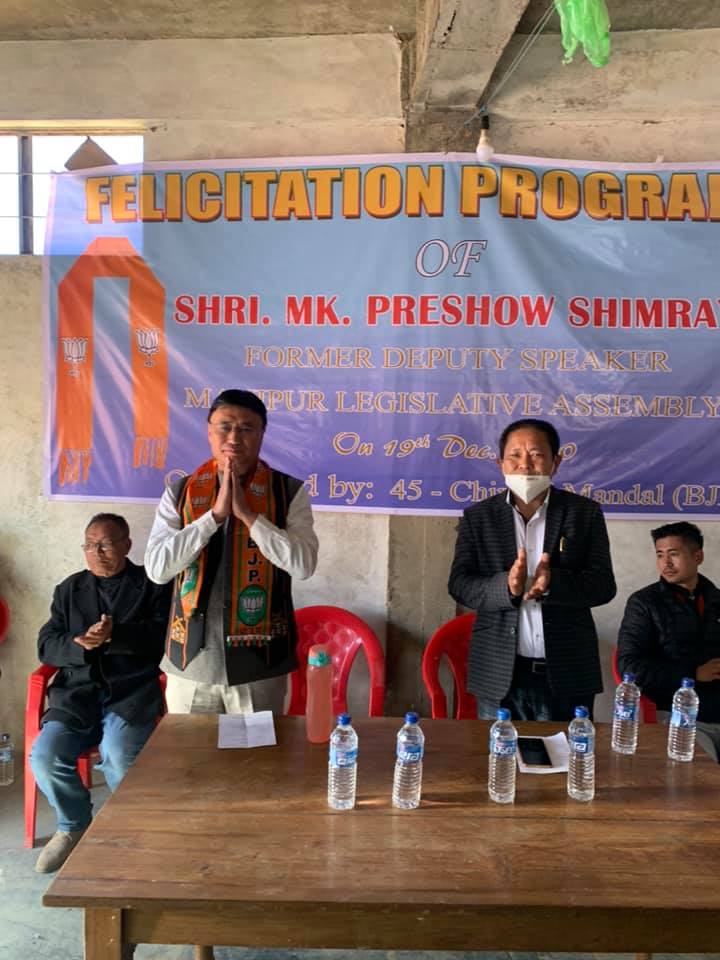 Speaking on the occasion, M K Preshow Shimray stressed on the deficit of leadership in the district and reminded how Ukhrul produced the finest politicians and statesmen in the likes of the first tribal chief minister of Manipur, Yangmaso Shaiza and Rishang Keishing, who held the longest term until recently, who were not just tall pillars of the Tangkhul community but also highly respected and regarded in Manipur political arena and loved by the people.

Committing to the strong and visionary leadership of N Biren Singh and the work his government has accomplished in the hill and valley, pointing out the recent cabinet meetings in the hills, as well the strong and dynamic leadership in the central BJP government, convinced him to have joined BJP Manipur Pradesh, and maintained that BJP is the largest political party in India, M K Preshow said.

He emphasized his ambition to prepare strong and abled youth leaders to take the community ahead in all spheres of development and well as stake claim the rightful share in the Manipur government. This, the former Deputy Speaker said, was one of his primary objectives joining the ruling BJP party. To prepare leaders for the future. While criticism was part and parcel of any politics, he also mentioned the difficulty and limitations of working for the public from the opposition bench.

He also reminded the party members that the interest of the nation was absolute and indispensable in building a robust nation. Nation first, party second, he asserted. He further stressed on the importance of moral and physical support, the interdependency of all the three Assembly Constituencies in Ukhrul district to prepare for ADC and 2022 Legislative Assembly elections, and further preached for unity and not remain selfish.

It may be mentioned that M K Preshow was inducted into BJP on July 16, 2020 by Manipur Chief Minister N Biren Singh in the presence of Manipur BJP President Prof. S. Tikendra Sing. The current government term will expire on March 2022.