Four hurt in inferno incident in Imphal; Firefighters and police rescues a person inside the house breaking the brick wall of the bathroom

15-year-old boy and an elderly woman, in an attempt to escape the fire incident, jumped out of the first floor of the house. They suffered injuries along with another member of the family who ran out of the house amid the razing fire. 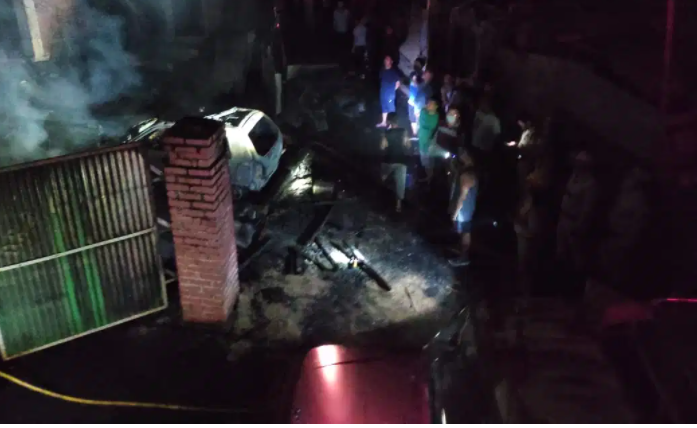 Four persons were injured in one of the two inferno incidents in Imphal, officials said on Thursday.

The four persons including a teenager and an aged old woman were injured after a fire broke that reduced to ashes a residential house and a grocery shop in Imphal’s Keishamthong locality late Wednesday night. Police said that the fire broke out on Wednesday night around 10.30 pm.

Soon after the fire broke out, fire fighters from Imphal fire service station and police rushed to the spot and struggled to douse the fire along with the local people, sources said. The firefighters and police rescued a member of the family who was inside the house by breaking the brick wall of the bathroom attached to the house. He sustained burn injuries, the sources added.

Sources said that a 15-year-old boy and an elderly woman, in an attempt to escape the fire incident, jumped out of the first floor of the house. They suffered injuries along with another member of the family who ran out of the house amid the razing fire. All the four injured persons were rushed to RIMS hospital for medical treatment, sources further said.

Meanwhile, despite the hectic efforts of the fire fighters, police and local people, the house and the shop were completely reduced to ashes.

Deputy director of state fire service L Nabachandra Singh who was personally involved in efforts to douse the fire said that delay in getting the information coupled with highly inflammable goods including LPG cylinders and grocery items in the shop made it a hard task to douse the fire.

In yet another fire incident, a lodging hotel (Rajdhani Hotel) in Imphal’s Paona Bazar was partially damaged on Thursday, sources said.

The police as well as fire service authorities are yet to establish the cause of fire but it is suspected to have been caused by an electric short circuit.

No injury was reported in the incident. However, most of the furniture and other materials of the hotel were reduced to ashes by the inferno which fire fighters took some hours to douse.