Manipur: First batch of COVID-19 vaccination to start from January 16 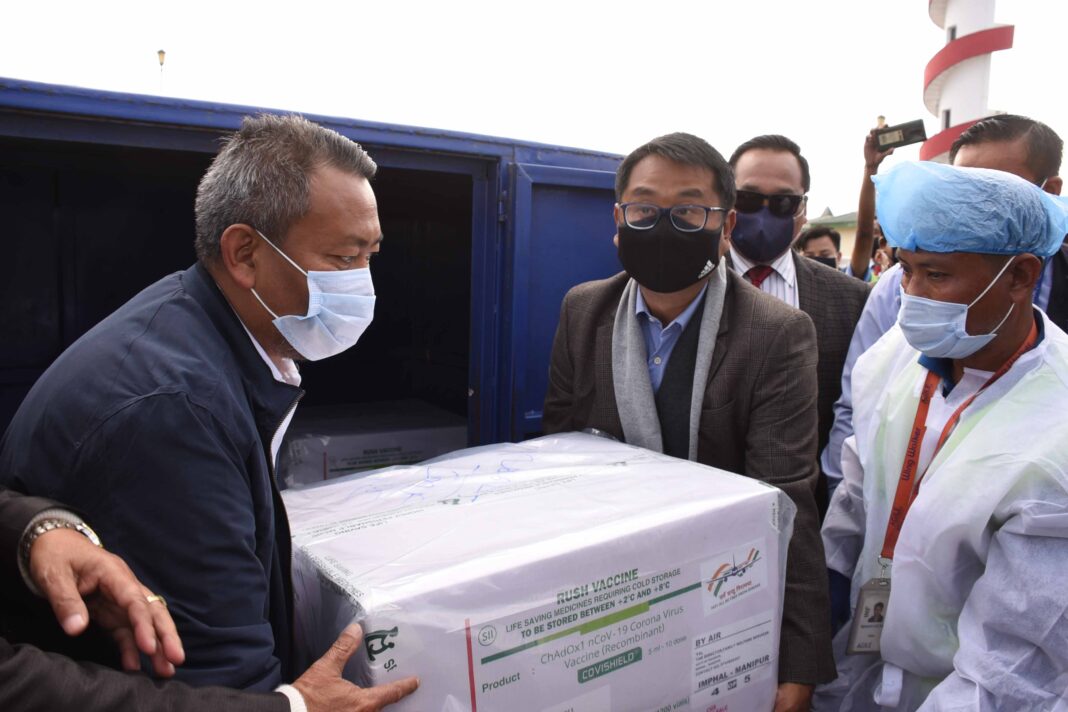 COVID-19 vaccine has arrived in Manipur On Wednesday. Manipur Chief Minister N. Biren Singh received the vaccine “Covishield” at Bir Tikendrajit International Airport. 54,000 doses of Covishield, the coronavirus vaccine produced by Serum Institute of India, were brought to Imphal for vaccination which would start from January 16.

Addressing the media at the airport, N. Biren Singh informed that the first batch of vaccination to health workers would start from January 16 as scheduled by Prime Minister Narendra Modi. A total of 8,476 health workers will be vaccinated at 10 places including Jawaharlal Nehru Institute of Medical Sciences (JNIMS), Regional Institute of Medical Sciences (RIMS), district headquarters of Churachandpur, Senapati, Ukhrul, Chandel, Bishnupur, Thoubal and Tamenglong and Shija Hospital and Research Institute on the same day, he added.

The Chief Minister showed his thankfulness to Prime Minister Narendra Modi and Union Health Minister Dr. Harsh Vardhan for their tireless efforts in timely distributing the vaccine to all over the Country and for giving priority to the State considering its geographical location. He added that the vaccines which arrived today would be distributed to all the District Headquarters for vaccination.

Biren Singh also maintained that vaccination would be done on priority basis and systematically as per the guidelines provided by the Prime Minister. Stating that there would be no favouritism and nepotism on vaccination programme, he informed that the State has 39,991 health workers and they will be vaccinated on the first batch at 246 vaccination centres including 138 Government centres and 108 private centres. Dry run had also been done in the 246 vaccination centres, he added.

Hoping that with the arrival of the vaccine, the State Government will succeed in its efforts to save the population from COVID-19, he appealed to the public to still strictly comply with Standard Operating Procedures, avoid unnecessary gatherings and take permission from concerned authorities before organizing any social gathering as before until whole population of the State are covered with the vaccination programme.