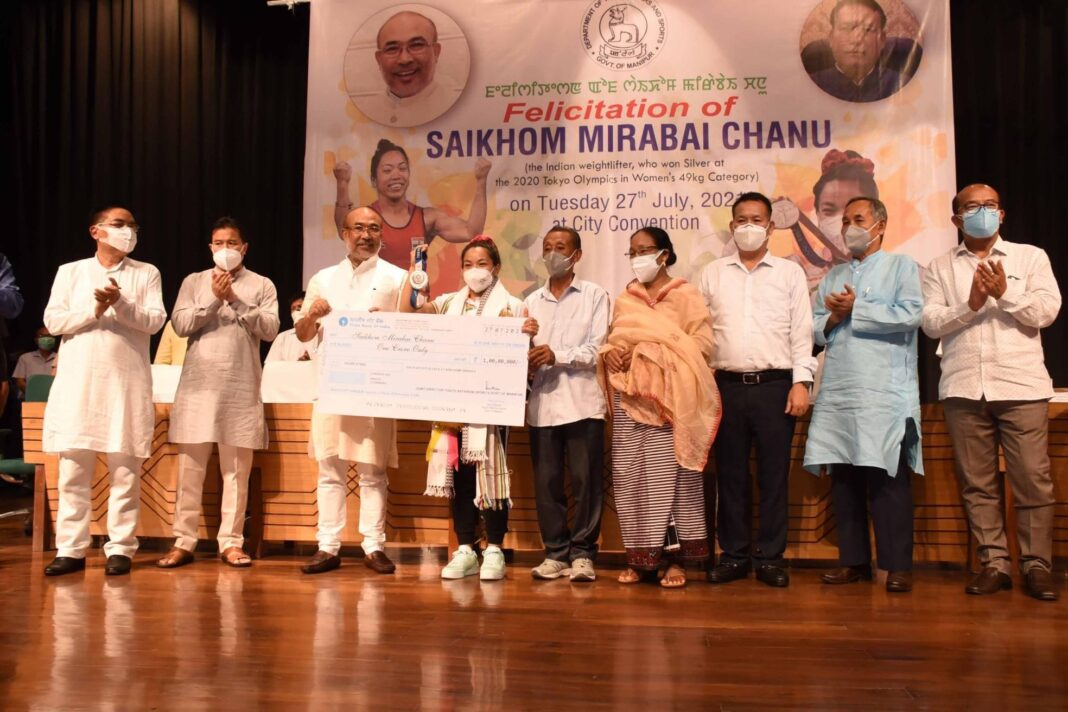 Government of Manipur and people of the State today accorded hero’s welcome to Tokyo Olympics Silver Medalist Km. Saikhom Mirabai Chanu. On her arrival at Bir Tikendrajit International Airport, Imphal at around 1:45 pm, Chief Minister Shri N Biren Singh along with Ministers, MLAs and a large number of people received her.

YAS Minister Shri Letpao Haokip said that Km. Mirabai’s success has once again testified to the world that Manipuris have the potential to stand tall in the world’s biggest sports event against toughest opponents. It is also an answer to all those who are against the idea of women empowerment, he added. Games and Sports is embedded in Manipuri culture and the State is home to several traditional games, and there is no argument that Manipur is the sports capital of the country as stated by President of India, Shri Ramnath Kovind, Shri Letpao Haokip said. He also mentioned different sports infrastructures constructed by the present Government.

Shri Th. Radheshyam said that Km. Mirabai Chanu brought laurels to the whole nation by dint of her hard work and determination. Stating that there is no dearth of talents in Manipur, Shri Th. Radheshyam observed that the State should focus on the sports disciplines, which are more suitable to the physique of the State natives.

Addressing the gathering, Km. Saikhom Mirabai Chanu said that she could win the medal because of the support of her parents, family members, friends and blessings of her mentors and coaches. It was because of the prayers of the people of the country and the State that she could stand on the Olympic podium, she said and added that she would like to dedicate the medal to the people of Manipur. Stating that her happiness knew bonds when Prime Minister Shri Narendra Modi and Chief Minister Shri N. Biren Singh called her, the champion weightlifter said that it was like a dream talking to them after she won the medal. She said that she worked so hard after the Rio Olympics to achieve the feat.

Later, the Chief Minister along with the Deputy Chief Minister, Ministers and MLAs took Km. Mirabai Chanu to her office located near 2nd MR complex, Ragailong, and ushered to her seat of Additional SP (Sports).