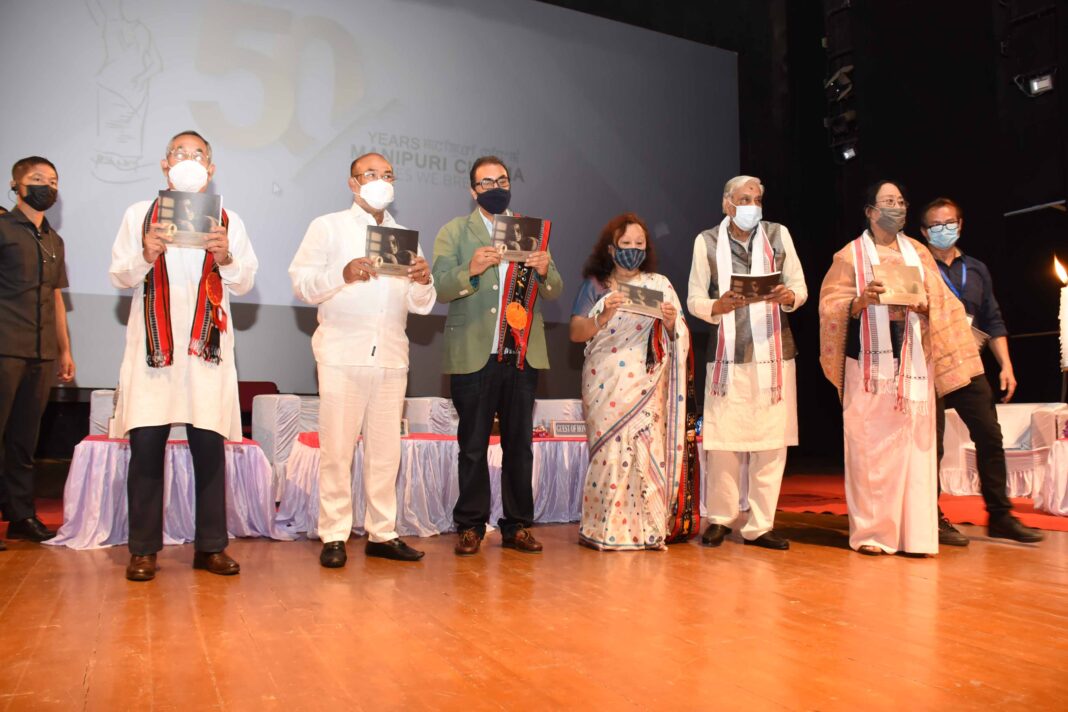 The year long Golden Jubilee Celebration of Manipur Cinema kicked off on Friday at the Palace Auditorium of Manipur State Film Development Society (MSFDS), Imphal. The function was organized by MSFDS. On the occasion, Manipur Chief Minister N Biren Singh unveiled the monolith of Manipuri Cinema and inaugurated S.N. Chand Cine Archive & Museum at the campus of MSFDS.

During the programme, a short video on Glimpses of Manipur Cinema was screened. Apart from felicitating veteran filmmakers, pioneers of Manipuri Cinema and artistes, the Chief Minister also distributed pension and financial assistance to beneficiaries of CMAT. A souvenir was also released on the occasion of the Golden Jubilee Celebration.

Addressing the gathering, N. Biren stated that the Government had taken up certain steps for the welfare and development of Manipuri Cinema by introducing Manipur State Cine Policy, 2020 and setting up a Commission for follow up procedures. To provide benefits to artiste who brought laurels to the State and encourage them for future development, the Government had also come up with Chief Ministergi Artistessing gi Tengbang (CMAT) providing financial assistance to talented artistes, he added. He further stated that Artistes Pension under CMAT had also been introduced to make easier the life of aged reputed artistes who have contributed in making the tradition, culture and art forms of Manipur more vibrant by working in various fields of arts.

Recalling the contribution of pioneers of Manipuri Cinema who had made tireless efforts to uplift Manipuri Films to a greater heights, he stressed that cinema had taken a big role in shaping a society and giving a face to the State in the field. He also expressed his proud feelings that the State had passed through a long journey in film making and is now celebrating its Golden Jubilee despite being a small state with less resources. He was also glad to the opening of Cine Archive & Museum which would be of useful inputs to the younger generation for learning film making.

Stating that the State had many talented youths in every field, Biren stressed on the need to unite and work together for a better Manipur. He further informed that the Government is ready to render necessary support and assistance to those who sincerely work for the development of the State.

Delivering his presidential speech, Deputy Chief Minister Y. Joykumar Singh said that celebrating the Golden Jubilee of Manipuri Cinema was a proud moment for the people of the State. He also added that the pioneers of Manipuri Cinema had contributed much to promote the State’s culture and art forms in their films rather than the motive of making money. Stating that Manipuri Films had now got less audience to watch compared to the olden days, he appealed to the present day film makers to take into consideration on how to attract audiences while making films to revive its popularity.