PM Modi continues attacking the Congress for its misrule

Congress released its manifesto in the city on Saturday promising not to implement citizenship amendment act if voted to power. 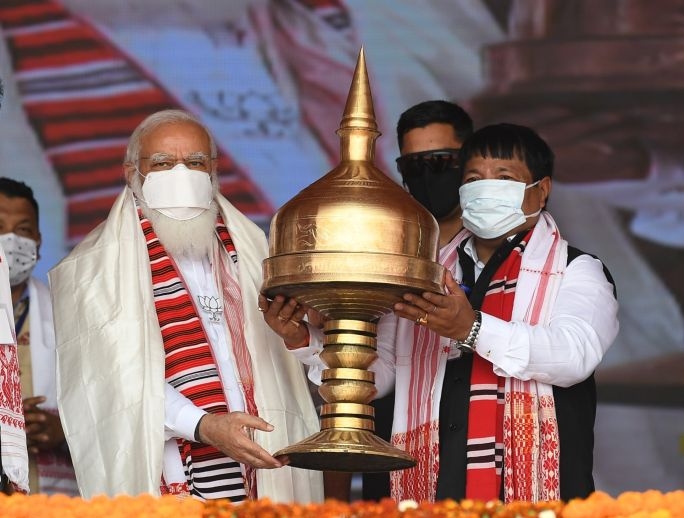 Stepping up verbal attacks on the opposition Indian National Congress, Prime Minister Narendra Modi asserted that the grand old party can assure only the corruptions, blockades, violence, separatism, confusions among the people etc.

Addressed a huge public rally at Bokakhat in eastern Assam on Sunday, PM Modi also forecast that the ruling Bhartiya Janata Party (BJP) along with its political allies would return to power after the State
legislative assembly elections scheduled for 27 March, 1 and 6 April.

The aggressive Modi also mentioned about the relentless incidents of poaching of one-horned rhinoceros in Kaziranga National Park, which is adjacent to Bokakhat town, during the Congress tenures. He claimed
that the BJP led government has now ensured the safety of rhinos with effective arrangements.

“All our sanctuaries, including Kaziranga, are our heritages and it is the government’s  responsibility to protect these reserves keeping an eye to the livelihood of forest dwellers. I am happy that the forest
area in Assam has increased in the last five years also increasing the opportunities for tourism,” stated Modi.

“Today I can respectfully say to all our mothers, sisters and daughters sitting here that we have worked hard to fulfil the responsibility and expectations with which you elected the BJP government,” said Modi adding that he wants Bharat to be included in one of the leading nations in natural, spiritual, cultural and
heritage tourisms.

Meanwhile, the Congress released its manifesto in the city on Saturday promising not to implement citizenship amendment act if voted to power. Senior Congress leader Rahul Gandhi released it in presence of several party leaders at Rajiv Bhawan. Among other promises include creating five lakh government jobs and 25 lakh opportunities in private sectors.

With more to add, the manifesto comprises Grihini Sanman scheme under which monthly supports of rupees  2000 to the housewives is committed.

It also assured to hike daily wages of tea plantation workers to rupees 365. Waiving off agricultural loans for the farmers is also on the card as well the protection of  language, culture and identity of the indigenous people.