Political Stand of the Nagas 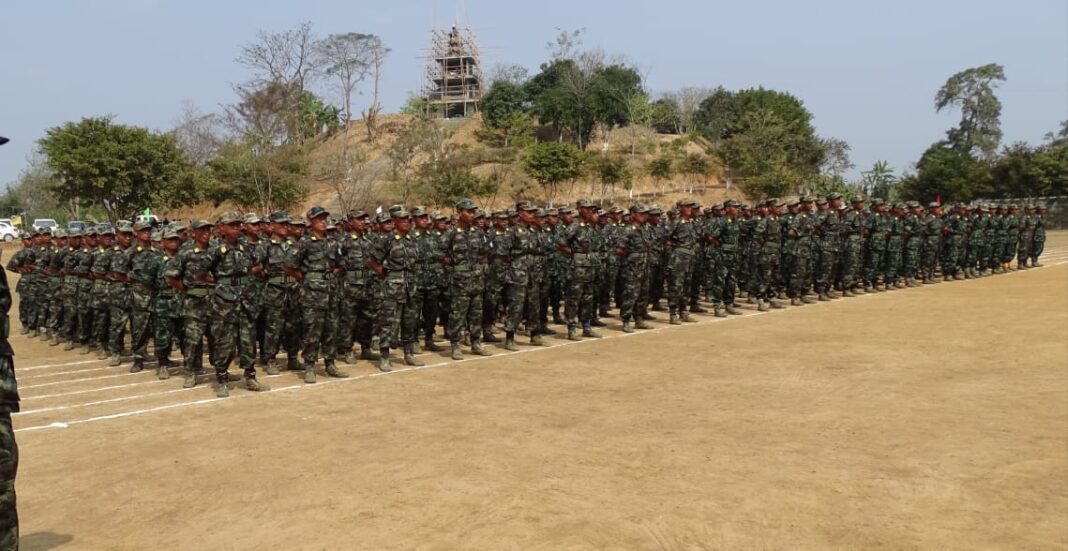 The term ‘Naga’ is a historical accidental name given by the British imperialist, which later becomes a recognized common national political nomenclature of the Nagas, who are composed of many tribes and sub-tribes indigenous to the common homeland called Nagaland or Nagalim. In fact, Naganess is traced from the line of a common history, common identity, common culture, common root of languages, common religion, common political will, and who have been living in the same country free and sovereign under their own government.

Twist and turn of history began when the British imperialist forces came and occupied a part of Naga territory. However, as the British were forced by the international nationalist forces to go back to their own country leaving their colonies, they left the occupied Naga areas too. Thereafter, the Indian and the Burmese expansionist forces came to occupy our territory against which the Naga people put up resistance movement for decades in defense of their territory, history, identity, culture and sovereign right at the cost of more than three hundred thousand precious lives.

Realizing that Indo-Naga conflict is political not military or domestic problem of India, the government of India invited leaders of the National Socialist Council of Nagaland (NSCN), the one and only authentic political organization of the Naga people for political talks at the highest level without any condition. Finally, government of India and NSCN as two entities engaged in a series of talks leading to the signing of a cease-fire agreement on 1st August, 1997.

In the process of talks NSCN leadership stated that Nagas and Indians came from different history. The Nagas are not asking for a piece of land from India. They have their own land only to be recognized by the aggressor states. Naga are not begging for sovereignty from India. Nagas are also a sovereign people. Sovereignty is not a commodity that can be given or taken away by others. Freedom and sovereignty are inherent rights of peoples and nations. They are ingredients of a people-hood. As your sovereignty lies with your people so also our sovereignty lies with our people; it is not with India or Burma. A government without sovereign power is a form without content. It is sovereignty that makes and unmakes things. Sovereignty is the power to develop a people into their fullest size physically, mentally, spiritually and socially. Hence, based on universal democratic principle of sovereignty, it was mutually agreed that sovereignty lies with the people. The Nagas are not asking for a flag from India or others. Recognize it or not, the Nagas too have their own national flag. Naga flag is the symbol of their recognized unique entity and sovereignty. Nagas are not praying to India for a constitution. The Nagas too have their own constitution called Yehzabo, the foundation and source of their laws through which they have been running their own government for centuries.

The concept of imperialism, colonialism and expansionism is a thing of the past. All the past empires including that of the Roman and the British were built on the debris of many nations and their independent states. People were never allowed to grow; they were pulled by the chains of slavery and driven by the whip of blood-drunk emperors. Now this is the era of democracy where everything is decided by the will of the people. The politics of the Nagas is but to decide their future by themselves and manage their affairs by themselves without interference from others. The spirit of self-determination is greater than the command of a dictator. The spirit of co-operation and co-ordination is stronger than the force of coercion. However, we are bound to coexist with others as a unique entity in harmony with the Divine law of interdependent relationship. It should be understood that the spirit of co-existence is stronger than that of the forced union. The spirit of self-reliance is the root of all sources. The Nagas are also for the spirit that creates. The Nagas must grow in as much as they have the right to grow and the potentiality to grow.

It is a proven fact that Naga people can fight like anything against the aggressors even though weak and small they may be. But now they have come forward for peaceful resolution of the problem through dialogue. And therefore, they are committed to political talks for working out an honorable and durable solution. And that finally, the historic ‘Framework Agreement’ was signed between the government of India and NSCN in the eye of the whole world. We are pretty sure that this Framework Agreement solves the chronic problems of the Nagas and the Indians as well. This agreement will bring not only the cherished solution and genuine peace in the land, but also build the material development of the Nagas and rebuild the psychology and relation of the two peoples damaged by the bloody war. Indeed, it will be the beginning of a new relationship and a new era for the two peoples. We strongly believe that it will certainly bring a lasting solution we have been looking for.

The situation in Nagaland (Nagalim) cannot be compared with that of other. We want the problem to be dealt with by the root and history is the root. We have different history. It has to be viewed from historical perspective. Apart from that there is no war situation herein Nagaland now. NSCN and government of India have been in talks for more than two decades with an eye to hammer out solution. We don’t see room for fighting between the two parties as of now. But history says that the past agreements with the government of India could not solve the problem because they were not Naga issue-based. The government of India and NSCN have now worked out the Framework Agreement as the basis for solution. In keeping with the spirit and letter of the framework agreement NSCN is deeply committed to solving the problem in spite of hurdles here and there. We believe no problem is too big or too hard to solve if it is tackled through mutual trust and respect by the parties involved. This problem cannot be left to be solved by time or left to be exploded. That will be too costly. If this second chance is missed again, government of India and NSCN will be answerable to the peoples of both parties and the generations to come in particular and to the peoples of the world in general. Then, they cannot blame heaven and earth, but it is they who are to be blamed.