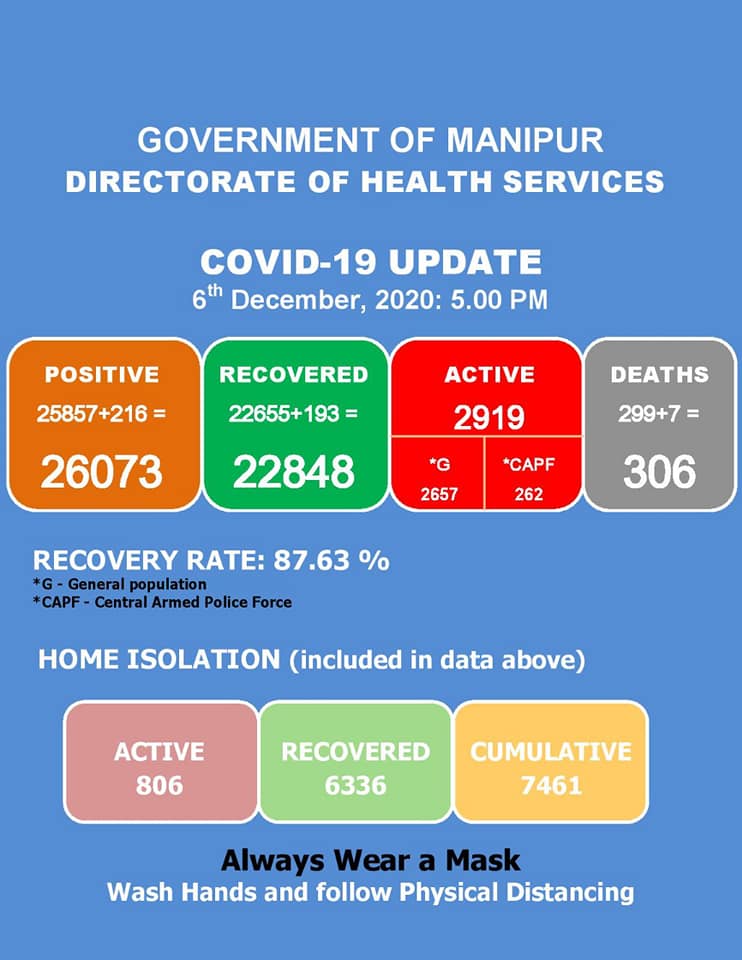 Manipur’s COVID-19 situation continues to be grim as the number of lives claimed by the virus has reached 306 even as the overall infection tally crossed 26,000-mark on Sunday.
The state recorded seven deaths over the past 24 hours (till 4pm of December 6), bringing the fatality due to COVID-19 illness to 306.

Of the seven deaths reported in the past 24 hours by the COVID-19 Common Control Room, three are from Imphal West, two from Imphal East and one each from Thoubal and Bishnupur districts.
Two of the casualties were females.

A total of 216 fresh infections reported in the past 24 hours have pushed the overall infection tally of the state to 26,073. The fresh infection included 26 Central Armed Police Force (CAPF) personnel.

The fresh positive cases from the general population are 77 from Imphal West, 47 from Imphal East, seven each from Thoubal  and Bishnupur, 25 from Kakching, one from Ukhrul, 11 from Tamenglong, four from Tengnoupal, two each from Kangpokpi  and Kamjong, three from Churachandpur and four from Noney district.

All the fresh infections of COVID-19 have been categorised as locality contracted cases as they have no history of travelling outside the state in the recent time.

They have been shifted to the Covid care facilities, the control room stated in a statement.
A total of 193 patients including two CAPF personnel were discharged after recovering from the highly contagious virus which the World Health Organisation had declared as global pandemic in March this year.

With this the 22,848 people who were diagnosed with the contagion were recovered, bringing the state’s recovery rate to 87.63% which indicates improving even though much below the national rate of 96.37%.

Currently, 2,919 active cases of COVID-19 including 262 CAPF personnel are being treated in various Covid care centres across the state.

Analysis of the district-wise infection case showed Imphal West district as the most affected among the 16 districts of the state. The district alone has 8,200 cases of COVID-19.