The two peoples have seen enough fighting, enough killing and enough hatred between them. They have lived too long in the illusion of false peace and false promises, which will conceivably bring the rise of people’s force on the stage again. 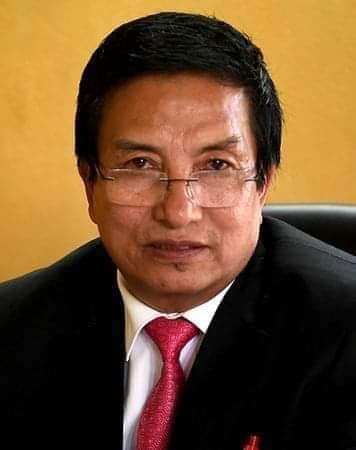 Small and a hilly land-locked country it may be, Nagalim is blessed with rich natural and mineral resources. It is a fertile land. Apart from perpetual flow of rivers and streams, we have another source of water supply from regular rainfall. There is no dearth of water and no desert in Nagalim. It is covered with green forest with varieties of fruits and a home to biodiversity. Some renowned geologists and scientists who surveyed the earth through satellites from above, on and below the surface said, “Nagas are sitting on the mount of gold.” They said there is an extensive mineral belt in Naga country. It is an important commercial corridor between the Indian sub-continent and the Southeast Asian countries. On top of that, the Nagas are endowed with added blessings of physical, mental and spiritual potentialities to grow in all fields. The Nagas are also rich in culture and legendary stories of the revolutionary heroes and heroines who championed the cause of the people.

Deeply moved by the love of motherland, our fathers fought back the Indian and the Burmese expansionist forces with determination and a great zeal of nationalism when they invaded our country after the departure of the British. They did so because land is everything and it is priceless for them. Land is the foundation of our history, our culture, our politics, our economy, and our nationhood, and that, if our land is lost to the invaders, we lost everything. If we do not honour our motherland, she will also dishonour us. If we sell out our motherland to the invaders, we will become their tenants or become beggars in our own land. When our land, falls everything of us will fall. Therefore, we must stand firm on the issue of land or we perish.

The past generations spearheaded by the revolutionary patriots stood firm on the issues of land and national principle with one mind, one decision and one faith in every event of aggression by the enemies.

Stirred by the spirit of nationalism all people without exception of age, sex and status joined the revolutionary patriots in the forefront to fight the enemies in defence of our land, our sovereign right, our identity, our culture, our history and future. The Indian leaders, applying carrot and stick policy came forward with a sugar-coated political bait in the form of an autonomous state under Indian constitution with a view to win over the heart of those corrupt and spineless opportunists and to divide the Nagas, but it was rejected by the revolutionary Naga people. Indeed, our fathers stood their ground in the face of the enemies’ onslaught to save the future of the Nagas and leave the legacy of a living history to their posterities.

proven fighting force to be reckoned with. They fought the enemies’ forces in the east, in the west, in the jungles, in the highways, in the towns and everywhere. In the diplomatic field too, taking all necessary risks and troubles, NSCN leaders spoke on the Naga issue to the world political leaders, international community, international human right organizations and the church leaders. The world is now well informed of the Naga political issue and situation in Nagalim. Mr Boutros Boutros-Ghali, the then General Secretary of the United Nations acknowledged, “There is a serious human right situation in Nagaland (Nagalim).” We do nnt believe enemies can distort the recognized unique history of the Naga nationhood however strong and crafty they may be.

The identity of man or animal runs in his/its blood. The identity of the Nagas too runs in their blood; our identity is also revealed in our culture, our history, our politics and faith. Law makers cannot create natural identity of a people; they cannot give it to a people or take it away from them. It is a gift of the sovereign God only to be recognized. After a long fight the Government of India and the National Socialist Council of Nagalim agreed the term two entities in the talk held at Bangkok on the 31st July, 2000. It was also reaffirmed in the subsequent talks and by the historic Framework Agreement of August 3, 2015. The recognized Naga national entity must be upheld at all costs and at all times or we perish.

History says there are aggressors all around in every generation at all times. It is they who start war. War destroys cities and states; war divides people and land; war destroys peace and progress on earth and war destroys harmonious interdependent relationship among peoples and nations. War must be stopped, but it cannot be stopped with weapons, it is to be stopped only by man; fighting may kill thousands of people, but killing cannot stop war rather it fuels war. War cannot bring peace on earth; War can be stopped only by man through agreement. Peace is brought by man through agreement. The Nagas believe that the Indo-Naga war can be stopped only by the two peoples through mutual agreement. The long-cherished solution of the Indo-Naga political problem can be arrived at only through mutual agreement; harmonious interdependent relationship of the two peoples can be institutionalized by agreement; and a lasting peace between the two peoples can be brought about by agreement.

This problem can never be solved by might; it cannot be left to be solved by time or left to the next generations; it must be solved now, but by the right authorities of the two peoples through political talks and agreement. We need peace in the land; we need peace not only for the present generation, but also for all generations of the two peoples. We need peace to walk together and live together in all fields. Both the aggressors and the aggrieved need peace. All of us need peace because peace is the will of God. The two peoples have seen enough fighting, enough killing and enough hatred between them. They have lived too long in the illusion of false peace and false promises, which will conceivably bring the rise of people’s force on the stage again. It is now the time of negotiation and the time of peace. Like it or not, it is the time to live together in peace that is built on the foundation of mutual respect, mutual trust and mutual recognition of right or war will swallow us.