Though Hunphun language was made the common language of the Tangkhul for the purposes of spreading the gospel, in the long run, continuing in the legacy of the colonials has repercussions. Today, when one refers to Tangkhul language, it means an amalgamation of multiple vocabularies into one language (i.e., one common language), or a slow endangering of Tangkhul village languages (i.e., multiple languages). 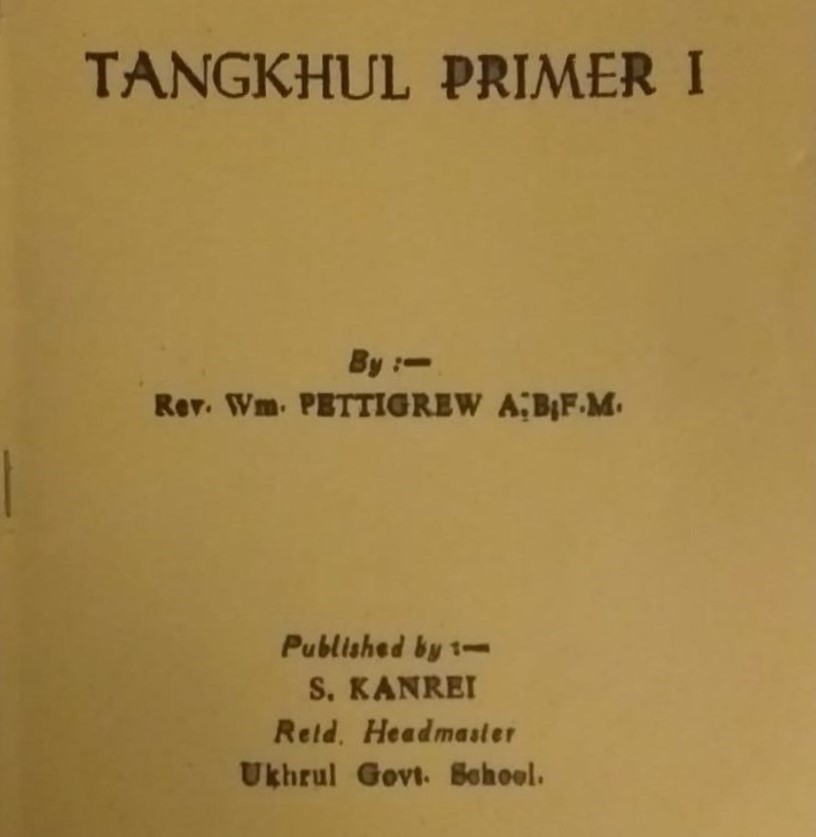 With these concerns, I try to briefly capture the history of writings on Tangkhul language and suggest that the locals should recover and cultivate their own village languages. This is a suggestion to move beyond colonial captivity in terms of our perception of indigenous language. This suggestion emphasizes the need to recognise the existence of multiple Tangkhul languages and their ingenuity, instead of prioritizing only one Tangkhul language.

These preliminary works were followed by the publications of Tangkhul Primer in 1897 by William Pettigrew, a Scottish-British Christian missionary. In this primer, Tangkhul language was adapted with the Roman alphabet or Latin alphabet by adding “ā” and “a”. This preliminary work was followed by a seminal work on Tāngkul Nāga Grammar and Dictionary in 1918. Pettigrew made Ukhrul-Hunphun language the common language (i.e., the lingua franca) of the whole Tangkhul area, though he was aware of the existence of about 150 villages which spoke different languages.

After this, several books and articles about the Tangkhul language were published. Whether the locals or outside writers, most of such works focus on the commonality of the Tangkhul language. The interest of the locals tends to focus on adapting the Tangkhul language to modern English grammar (and dictionary); while outside writers come with scholarly interests of the indigenous language. The following are some of the significant contributions: Marrison (1967), Bhat (1969), Mathews (1972), Mattisoff (1972), Zimick (1973), T. Luikham (1974), Arokianathan (1980, 1987), Kaping (1991), N. Luikham (1997), Victor (1997), Shimray (2007), etc.

However, in the recent past, there has been some research interests that recognises the distinctiveness of Tangkhul languages (e.g., Mortensen, 2003, 2009, 2011, 2013). What such research does is the reenforcing of the understanding that each village language is sustainable in terms of principality. In implication, it supports the understanding that each indigenous language is worth retaining its originality.

Though Hunphun language was made the common language of the Tangkhul for the purposes of spreading the gospel, in the long run, continuing in the legacy of the colonials has repercussions. Today, when one refers to Tangkhul language, it means an amalgamation of multiple vocabularies into one language (i.e., one common language), or a slow endangering of Tangkhul village languages (i.e., multiple languages). On one hand, what that means is that the ingenuity of Hunphun language would slowly disappear, while incorporating multiple vocabularies from different village languages into it. On the other hand, hundreds of indigenous Tangkhul languages would be critically endangered or become extinct. It means that only the older generation, such as our grandparents, will speak the indigenous language or worse, there will be no speakers of the language.

This reality urgently calls for the recovery of various Tangkhul languages. As indicated earlier, Tangkhul language is already listed in the vulnerable category by UNESCO. This is to suggest that our language is spoken by most children, but it is only limited to certain places (Ukhrul and Kamjong districts, Manipur.). It also means that many Tangkhuls (especially the third culture kids) no longer speak the language. And in the case of the Tangkhuls, since all villages speak their distinct indigenous languages, most, if not all, of the languages are not only vulnerable but also endangered. This is to say that children no longer learn the language as their mother tongue in their home. While prioritizing speaking/learning the English language or other dominant language, especially those who have moved out of Tangkhul inhabited areas, their indigenous languages are ignored or neglected.

The way forward would be to move past the aforementioned colonial captivity. In terms of conceptualization, we should begin to recognise the presence of multiple indigenous languages. In terms of practicality, we should start cultivating our own indigenous languages, instead of focusing on one common language. It may mean recovering our multiple languages by means of writing and recovering cultural heritages of every village.

Dr Taimaya Ragui is currently an academic research coordinator of The Shepherd’s Academy of Oxford Centre for Religion and Public Life. His specialization is in the area of interfacing theological interpretation of Scripture and contextual theology. The writer has been engaged in online learning for the past five years.