AHLAVCCA in collaboration with various student bodies and civil society organizations of Kangpokpi District had announced a 24 hour total shutdown from 5am of July 2 till 5am of July 3. 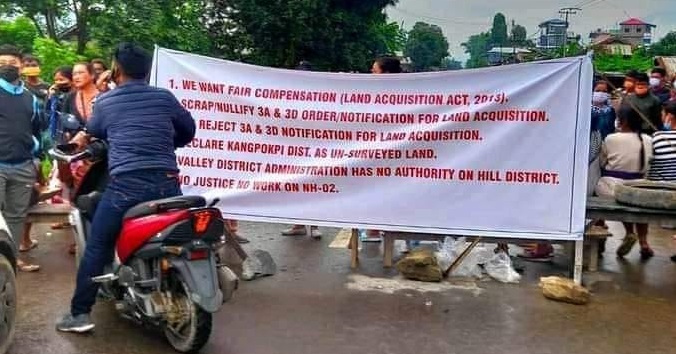 The AHLAVCCA in collaboration with various student bodies and civil society organizations of Kangpokpi District had announced a 24 hour total shutdown from 5am of July 2 till 5am of July 3 in connection with the Asian Highway expansion.

Asian Highway Land Affected Villages Chairmen/Chiefs Association had earlier stated that despite its effort to resolve the issue in an amicable way, the State Government and other authorities have remained adamant towards its peaceful approach, compelling the AHLAVCCA to resort to total shutdown.

The AHLAVCCA had also made its stand clear that unless fresh notification/orders based on the joint survey conducted as per Deputy Commissioner Kangpokpi notification of June 3, 2020 is issued or a fresh joint survey is conducted and fair compensation is paid to all the genuine affected victims no other notification or orders would be entertained and accepted.

Seijang also mentioned that considering the lackadaisical attitude of the State Government over the Highway expansion row, the Thadou Inpi Sadar Hills has resolved to support and endorse AHLAVCCA in its movement for justice and render all available resources and cooperation during the total shutdown.