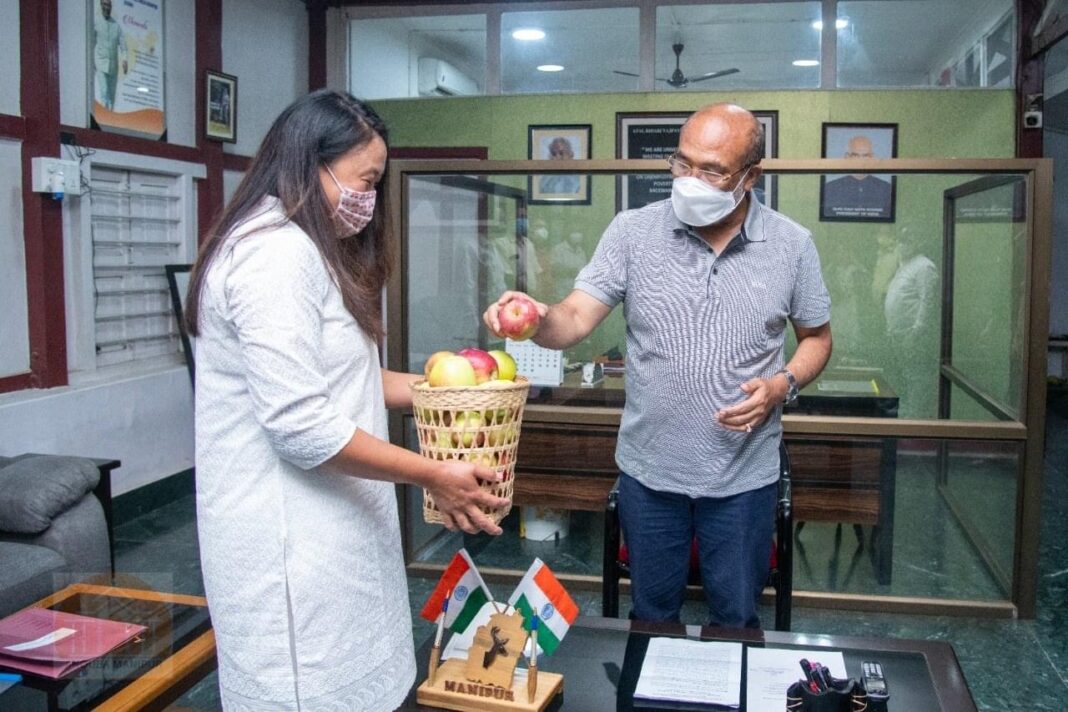 Manipur Chief Minister, N Biren Singh on Tuesday evening met Awungshi Shimray Augustina of Poi village under Ukhrul district who had successfully harvested over 150 kilogram of apples from her orchard for 2021 season.

Chief Minister appreciating her as well as her family’s dedication for bearing success in apple farming from the 55 saplings she cultivated two years ago, handed over a reward of Rs 1 lakh to Awungshi Shimray Augustina.

Additionally, the state government will be sponsoring her to train farmers who wish to grow apples through state led agency, Manipur Organic Mission Agency (MOMA), through the Horticulture department, N Biren informed.

Chief Minister N Biren sitting down with Augustina in a brief meeting in Imphal said, “In a place like Manipur, the knowledge about diversification into profitable crops can play a significant role in transforming the poppy affected areas as well.”

Augustina explained in an interview with Ukhrul Times how carefully the saplings were planted over the past two years in virgin soil mixed with pig manure extremely rich in nutrient dense. The variety of apples Augustina said suitable for the climatic conditions so far are the low chilling varieties Dorsett Golden and Anna, which she sold for Rs 200 per kilogram this season.

Two other saplings of Red Fuji, the more expensive variety and Green Spur she planted in her orchard, just a walk away from her house in Poi village didn’t bear fruit.

Other farmers in Ukhrul district villages such as Hungpung, Shokvao among others harvested equally good amount of apple harvest this season. Ringphami Thingshung from Hungpung who was in the same training group with Augustina planted 90 sapling out of which 85 survived and yielded excellent amount of apple.

In the year 2019, villagers from Shokvao, Hungpung, Lunghar, Talui, Muirei, Poi among others went to attend workshop on apple cultivation at Himachal Pradesh organized by North East Council, sponsored through Council of Scientific & Industrial Research in an endeavor to reach out to Northeast villages to experiment a pilot project of apple cultivation. The result so far has been exceptionally promising.

Also read: Apple harvest in Ukhrul, a promising ray of hope for villagers and farmers