Adonis Khariksing Tangpu represented India in the 25th Asian Mountain Bike Championship held in 2019 at Keferdebian, Lebanon in the Under 18 category. 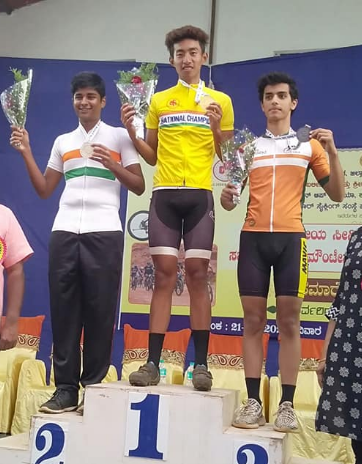 MTB Cycling Championship is organized by the Cycling Federation of India (CFI).

Son of Dr. Vareishang Tangpu and Glory Tangpu of Peh village, Adonis brought laurels to Manipur state and Tangkhul community for winning all three Medals in different events of this tournament.

CFI, a pioneer in the promotion of cycling sports in India, affiliated to the Indian Olympic Association (IOA), Asian Cycling Confederation (ACC) and Union Cycliste International (UCI) for the first time introduced the “The Best Cyclist Award” award, and that award went to Adonis.

Dr. Vareishang Tangpu told Ukhrul Times that his family is so grateful to all of Adonis’ well-wishers, and Almighty God.

Adonis Khariksing Tangpu represented India in the 25th Asian Mountain Bike Championship held in 2019 at Keferdebian, Lebanon in the Under 18 category.

Cycling Federation of India is the sole body recognized by Ministry of youth affairs and sports, Government of India for the promotion of the sport of cycling in India.