Forgive us if we have ever done any wrong to you: Gaikhangam on INC’s 136th Foundation Day

Gaikhangam: “Let us join hands together and vanish the parties who are anti-poor, anti-farmer and anti-freedom. And please forgive us if we have ever done any wrong to you. We will always listen to you and help you out in any situation”. 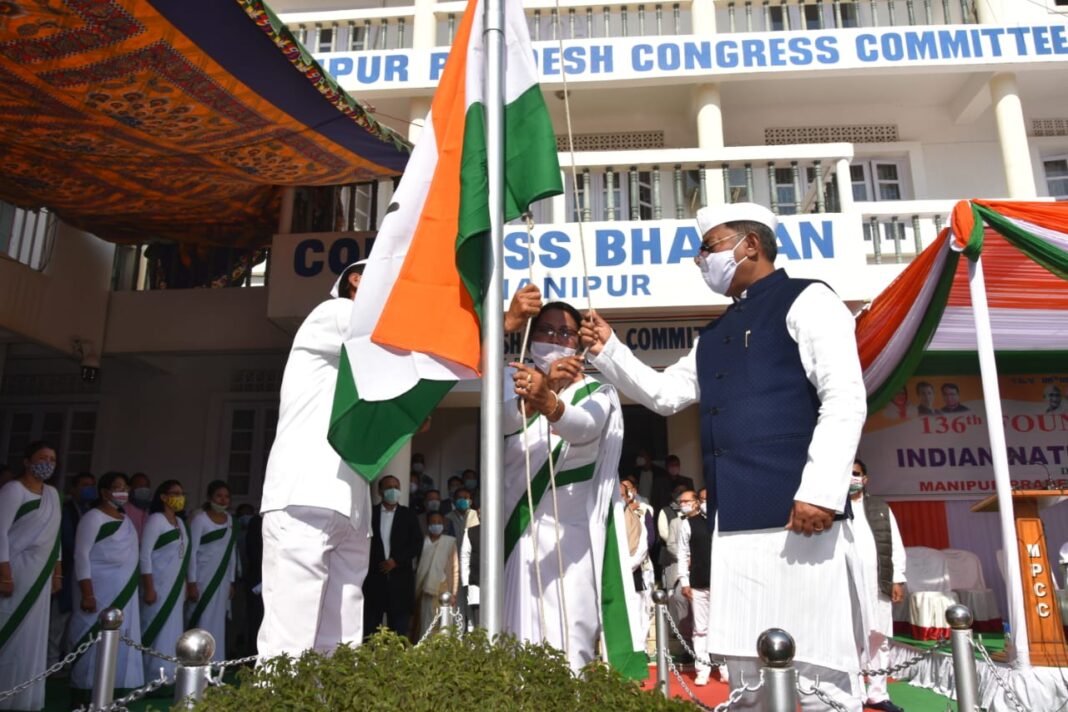 “Let us join hands together and vanish the parties who are anti-poor, anti-farmer and anti-freedom. And please forgive us if we have ever done any wrong to you. We will always listen to you and help you out in any situation”, Gaikhangam said on the 136th Foundation Day celebration of Indian National Congress held at Congress Bhavan on Monday at Congress Bhavan, Imphal.

The Manipur Pradesh Congress Committee (MPCC) President Govindas Konthoujam in his speech stated the Congress Party’s role in attaining India’s freedom from the colonial British rule is unarguable and added that the party’s love for the country is supreme, promising that “the party will be able to show them how much we love our motherland.”

Taking a dig at the ruling BJP led government, Govindas, while giving a befitting reply said “the Legislative Assembly that are now seated by the BJP parties were built during the time of Congress government. And they had the guts to ask what Congress Party has done for the state inside the Assembly.” Claiming that the Congress party has never spread propaganda, the MPCC president further said that “all we have ever think about is to make sure that India should become a developed country.”

Expressing his discontent on the expenses of Union Home Minister, Amit Shah’s, Imphal visit, Govindas said “you must have seen all the big banners and all the preparations done for yesterday. I wonder how much they spent in that. If they had utilized those money in social sector, it would have been a great benefit to the people. You can also compare today’s GDP to the GDP of that Manmohan’s time” he further said.

Reminding the government’s curb in freedom of expression, Govindas remarked the decline of freedom speech, and press. “We cannot say anything we want, we cannot express our opinions freely like before. Therefore let us revive Congress party, help us in building up the country again and we promise to bring back the freedom that you are losing now” he said as a concluding remark.

CWC member of AICC, Gaikhangam also stated, “Congress party is not the same with other parties who were formed just yesterday. Congress party was founded by only 72 members. But now, there is no area in the country where Congress party doesn’t reach. This party is a very old one”.

“Under this present government, the people and the country as a whole is going backwards. The suffering that people experienced at the time of British rule is once again repeating today. Freedom of press is no longer available. The meaning of Democracy has perished. Let us get freedom from the ruling party who has not even allowed us to express our opinions, where we cannot do anything, where farmers are suffering to a great extent. This present ruling party is anti-people, anti-farmer. They claimed that they were the one who brought the law and order in the region when the law and order was already there before they rule the state”, said Gaikhangam.