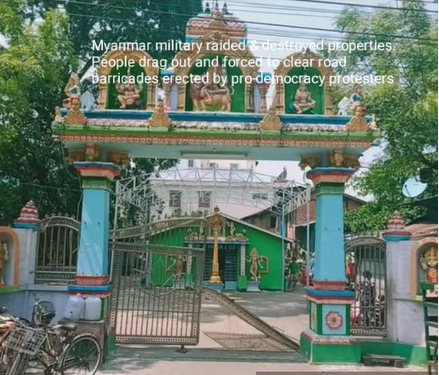 In a violent crackdown on pro- democracy protesters, the Myanmar military raided a Hindu Temple in Yangon and destroyed the front gate and properties.

The military broke-open the entrance gate of Goddes Kali Mandir at Thingangyun, Yangon and raided the Temple on March 18. They dragged out people who were inside the temple and forced them to clear the barricades erected by the protesters.

It may be noted that the president of India Mr. Ram Nath Kovind visited the temple on 13 December 2018. President Kovind was on a high-level bilateral engagements under the rubric of the ‘Act East’ and the ‘Neighbourhood First’ policies, when he visited the temple and offer prayers with first lady Savita Kovind.

On 14 March 2021, a Hindu widow was shot dead at Bago station. 38 years old Daw Sandima was shot on head when she was returning home from a Laundry. She left two daughters (16yrs & 9yrs) and a son (8yrs).

A hindu youth U Chit Tun @ U Ma Ma @ U Shan Bihari died when a military vehicle hit him at Taungyi Township on March 18.