“Nagas are not a confused race of people, we are well aware of our history, so are the women, who have faced the brunt of Indian militarization and its unimaginable atrocities, under the Armed Forces Special Powers Act for decades.” 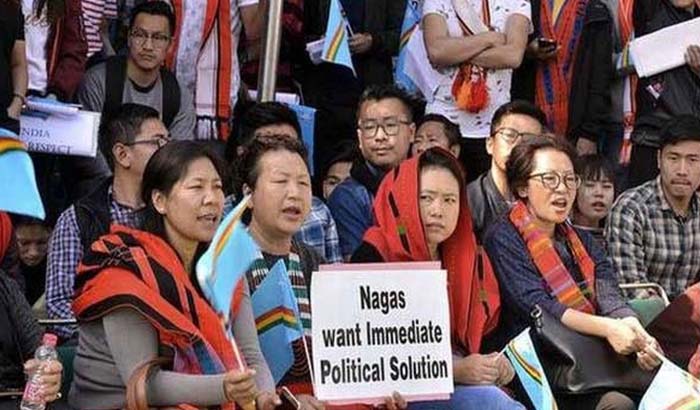 The Naga Mothers’ Association (NMA), in its press note released on Sunday, expresses “deep displeasure with the latest statement of the Hon’ble Governor of Nagaland, Shri R.N. Ravi,” and added that he “is confused on his delicate role of peacemaker and Interlocutor of the longest Naga freedom struggle in the North east region”.

In spite of attaining fifty years of statehood, NMA also is deeply anguished to realize that Nagaland is “still caught in the throes of militarization, armed conflicts, violence against women, deep corruption in governance, lack of accountability, exclusion of women in decision making bodies and violations of citizen’s rights to basic amenities”.

The NMA statement underlined the fact that mothers and women compose half the Naga population and that they have struggled alongside their men and brothers, in war and peace, as they stand on the threshold of a new understanding of peace between the GOI and the Naga people. It also says that as the Naga people stand at the cross road to a historic peace, the Governor’s patronizing speech has proved that there is great disrespect to Naga’s history and the thousands who have marched and died under the Naga flag.

“The Naga flag is not a flag of the Naga Political Groups, it is a flag revered in remembrance of our struggle, a living symbol of our political belief and our Naga identity,” the statement points out. “Nagas are not a confused race of people, we are well aware of our history, so are the women, who have faced the brunt of Indian militarization and its unimaginable atrocities, under the Armed Forces Special Powers Act for decades,” it added.

The Naga Mothers Association maintains that with its slogan of “Shed No More Blood,” has worked for years to bring peace and create better understanding through dialogues, whether it be with our armed brothers or with successive Governors, Union Home Ministers, Primes Ministers of India, over the decades.

“Never in our history have we seen such intolerance and arrogance from Indian leaders, as reflected in this instant case,” reflected the statement.

NMA further states that the language of Peace begins with mutual respect and this must be maintained by the Hon’ble Governor, who is not only the Head of state but also involved in bringing Peace to our Naga areas.

According to NMA, Mr Ravi’s assertion that the traditional village institutions and tribal bodies are the primary stakeholders in the Naga political issue, unfortunately, shows his complete ignorance, in not realizing, that Naga women are equal stakeholders, in the Naga Political process.

NMA also asserts that Naga women over the years have walked the talk, trudging into deep jungles and areas untrodden by many traditional village institutions and few tribe leaders, in search of their armed brothers for peace.

“Therefore, it is highly questionable, that the esteemed representative of the Government of India, has not taken cognizance of Naga women’s expressed wishes for peace and an early settlement, inclusive of all NPGs, for the future of our children in all Naga areas,” says the statement.

“History of other peace processes around the world clearly proves that when women’s voices are not counted and goes unheard by Negotiators, peace is not sustained and peace processes break down,” cautions NMA.

The NMA questions as to why there is such disrespect to the primary stakeholders in the Governor’s Message, who are also Naga women, the other half of the Naga population in all Naga areas.

Expressing its high expectation from Head of the State who also carries the responsibility of being the Interlocutor, NMA further rues that Mr Ravi’s official address “should not have been accompanied by dire warnings of wrath or threats, to the Nagas, especially to Naga women, who have suffered so much under the impunity of the Armed Forces Special Powers Act since 1958,” and adds regretfully that the Act still continues to violate right to peace and security of the Nagas.

The Naga Mothers’ Association urges the Hon’ble Prime Minister of India to ensure that there are measured words of peace and respect for the Naga people, including Naga women, from the office of the Raj Bhavan.

“We look towards an early inclusive Peace Settlement that brings Peace and Justice to all Naga areas,” says the NMA statement.