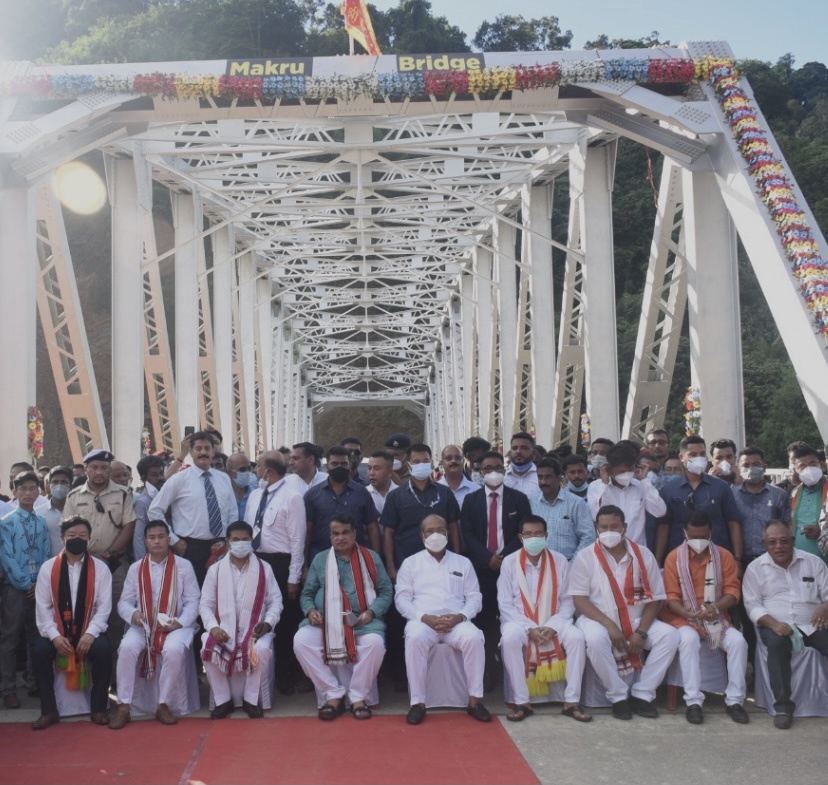 Fulfilling the long awaited dream of the people of Manipur, Union Minister for Road Transport & Highways Shri Nitin Gadkari today inaugurated the Makru Bridge located at Tamenglong district of Manipur dedicating it to the Nation. The Union Minister also inaugurated and laid foundation stones for other 15 National Highway Projects at a grand function organised by the State Government at the City Convention Centre, Palace Compound, Imphal. The Projects cover a total length of 298 Kilometers with a sum investment of Rs. 4,148 crore.

During his one day visit to the State, Shri Nitin Gadkari was accorded a warm welcome by Chief Minister Shri N. Biren Singh and his cabinet colleagues at the Bir Tikendrajit International Airport.

Speaking on the occasion, Union Road Transport and Highways Minister Shri Nitin Gadkari stated that progress of any nation depends on the growth of sectors namely Agriculture, Industries and Service sectors and a visionary leader with appropriate decision and policies could bring socio-economic transformation. He expressed his firm belief that under the visionary leadership of Chief Minister Shri N. Biren Singh, Manipur would transform socio-economically and become one of the prosperous states in the Country. He also maintained that the Central Government, under the leadership of Prime Minister Shri Narendra Modi, had always given priority for the development of Northeastern States. Asserting that there is no dearth of funds in the Central Government, he urged the State Government to cooperate with his Ministry and expedite the works to the optimum and also asked the authorities to solve any issues in land acquisition and environment clearance of the projects at an early date.

Stating that the country had incurred a large amount of expenses in importing petroleum products, he informed that the Central Government is working on diversification of agriculture into the energy and power sector. He stressed on the need to create employment potential in the backward area of the country, by making agriculture economically viable, which would help in eradicating poverty. Expressing happiness on his ability to contribute to the development of the road infrastructure of the State, he stated that the National Highway projects which were inaugurated today would further boost the overall development of the State.

He informed that the Ministry had already sanctioned DPR of Rs. 5,102 crore and projects costing around Rs. 10,671 crore would be sanctioned for the year 2021-22. He also added that the Annual Plan for the State had been raised to Rs. 5,000 crore from earlier plan of around Rs. 300 crore. Assuring that the Ministry has no lack of resources, he sought support of the people in carrying out development projects. He further assured to include the expansion of 350 Km of National Highways in Phase –II of Bharatmala Projects. He also announced the establishment of a Model Inspection and Certification Centre in the State with state of art equipment to test the fitness of vehicles. He also accorded sanction for elevated highway project with a cost Rs. 5,000 crore and asked the State Government to complete the DPR and start the tender process. He also cleared and sanctioned certain projects proposed by the Chief Minister.

Delivering his presidential speech, Chief Minister Shri N. Biren Singh stated that inauguration of Makru Bridge was a milestone achievement for enabling seamless movement of goods and services along the NH-37 bringing relief to both transporters and the general public. Informing that the construction of Barak Bridge would also be completed before December this year, he maintained that the Government had been extending all possible assistance in removing difficulties for timely completion of the bridge.

Expressing gratitude to the Union Minister for inaugurating and laying foundation stones for 16 National Highway projects, Shri N. Biren Singh requested the former to consider sanction of proposal of significant projects submitted by the State Government. The proposal included up-gradation of 7 State Roads of strategic and economic importance covering a total length of 433 Km into National Highways, construction of Trans Manipur Highway of approximately 800 Km along the State’s Border by upgrading and reconstruction of existing state roads, Four Laning of Imphal-Moirang Road considering the cultural and commercial importance of the road with a proposal for full compensation for land acquisition to be borne by NHIDCL, to provide a road network of around 1,040 Km for direct and intra connectivity between hill districts, to fast track the implementation of the Elevated Highways Project to mitigate the inconvenience in the Imphal City, improvement of road from Kangpokpi to Tamei proceeding to Tenning under Inter State Connectivity Scheme or any other Scheme of the Ministry and extending of Hill Area Development Programme to remaining hill districts of the State with a request to enhance allocation to at least Rs.100 crore per district.

Thanking the Union Minister for his immense support for development of the State, he assured commitment of the State Government to extend all possible efforts to ensure completion of projects on time and sought to continue unwavering support and guidance from Shri Gadkari’s side in future.

It may be mentioned that National Highways and Infrastructure Development Corporation Ltd. is the implementing agency for the projects which were inaugurated and foundation stones were laid.