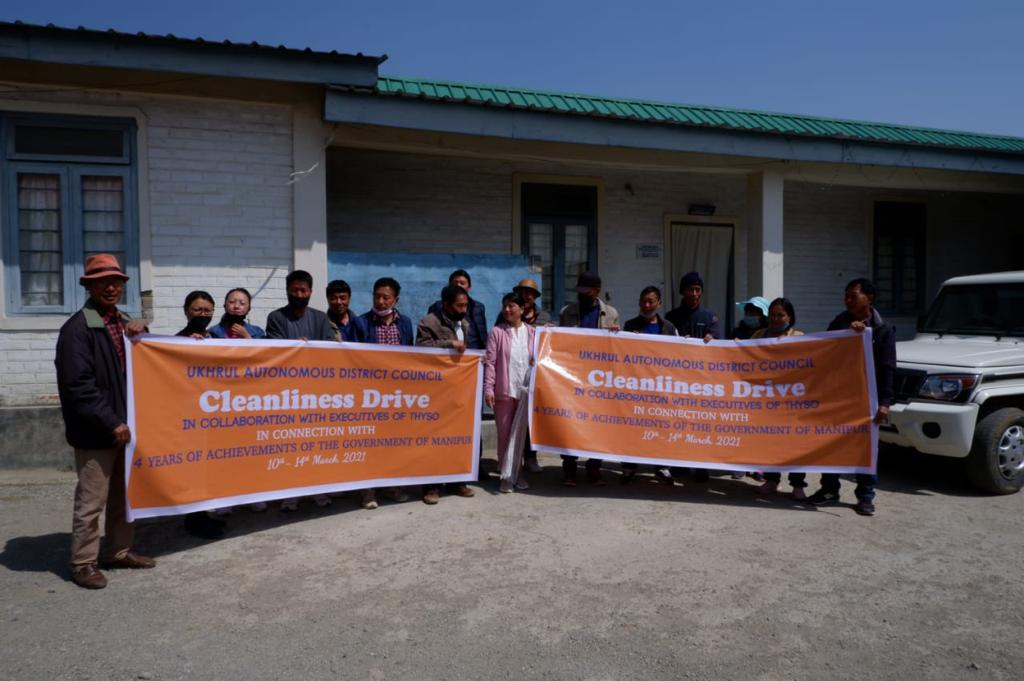 The ongoing observance would culminate with a cardinal celebration on March 15 across the state. It may be recalled that on 15 March in 2017, N Biren Singh took oath as the BJP’s new chief minister of Manipur putting an end to 15-year long Congress rule under Ibobi leadership in the state.

On Thursday, the UADC administration teamed up with Hungpung’s THYSO and conducted a cleanliness and tree plantation drive at the UADC’s garbage dumping site, some 15 km off the town along the Ukhrul-Imphal route.

“These are pre-event preparations and today, we are involving not just our own sanitation workers but also staffers from different departments of ADC, along with members of THYSO,” UADC chief executive officer Polly Makan said.

She continued that all the garbage stuffs that had spoiled the dumping site has been cleared. “During the drive, the wastes that were strewn over the side of the Ukhrul-Imphal road were also removed and new sign boards erected at the site to dissuade the public from illegal/haphazard dumping of wastes,” she said.

For quite some time, the ADC sanitation workers had had a hard time in checking haphazard dumping of wastes by the public and private parties along the roadside which had created an unsightly mess.

“It’s our earnest appeal to the public and private groups to dump their garbage properly at the designated location and not litter around and on the road side,” Makan said, adding that the dumping site has been sanitised and tree saplings have also been planted in and around the site to give it a pleasant environment.

UADC, which is being assigned the task of nodal department for the main celebration on 15 March, has also started cleanliness activities in the main town areas since March 10. “We have done some cleaning in certain parts of the town areas on Wednesday and we would continue with the same activities in the next few days till 14 March,” informed the ADC officer.

According to Makan, the ADC administration has also taken up beautification and decoration by putting up illumination at its Phungreitang office campus as part of the ongoing preparation.

Constructed by the Small Town Committee (STC) of the UADC Ukhrul at Aso near Cement Factory Hungpung, the dumping site was inaugurated on 1 April in 2015 with the aim of streamlining waste management in the township.