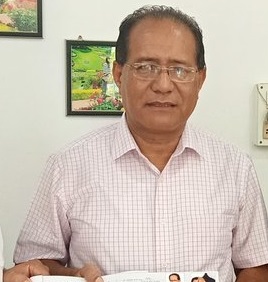 The Bharatiya Janata Party (BJP) of the state of Meghalaya on Wednesday felicitated Dr M Chuba Ao, the newly appointed in-charge of the party in Meghalaya on his first visit to Garo Hills.

The felicitation took place in the presence of many BJP leaders of the region at the Tura Regional Office, with the Meghalaya state BJP president, Ernest Mawrie, who was also present at the occasion and acted as the chairman for the meeting.

According to a report, the leaders from Garo Hills expressed their views on the subject of corruption in the Garo Hills region with everyone being given time to put their point across.

The meeting also sought reports of the organizational structure in the districts and mandals. Further woes of the members in organising the party in Garo Hills were also heard.

The state in charge, Dr M Chuba Ao, took note of all the issues raised in the meeting and assured to work out a solution to all anomalies being faced by people of Garo Hills.