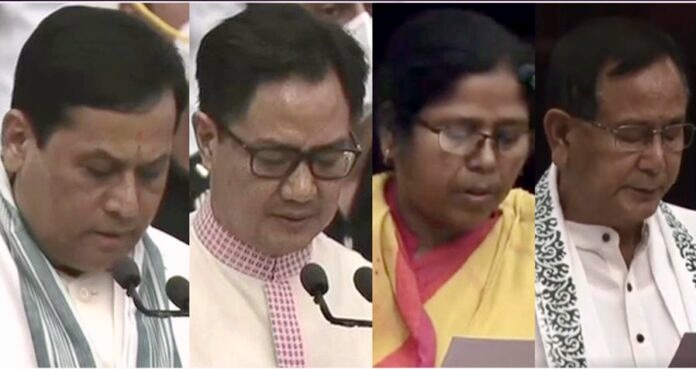 The oath-taking ceremony of the new cabinet ministers began from 6 PM. It commenced with Narayan Rane – the former Maharashtra CM, and former Assam CM Sarbananda Sonowal taking their oaths.

Cabinet will include 4 ministers from the Northeastern India.

These ministers are – Former Chief Minister of Assam, Sarbananda Sonowal; Pratima Bhoumik, and Dr. Rajkumar Ranjan Singh as first-term MPs from Tripura and Manipur, respectively while Arunachal Pradesh MP and sitting minister Kiren Rijiju is promoted in the Modi government.

Sarbananda Sonowal sworn-in as the Cabinet Minister. Kiren Rijiju is one of the 7 cabinet ministers been promoted. While Pratima Bhowmick and Dr. Rajkumar Ranjan was appointed as the Ministers of State (MoS).

A total of 20 state ministers, 15 cabinet ministers have sworn-in. While, 7 ministers are promoted.

Besides, 36 ministers are newly appointed.

14 young ministers below the age of 50 are appointed.

As per the sources, the centre consist of lawyers, doctors, Engineers, Civil servants, PhDs, MBAs and ministers with Graduate Degrees.

The event marked the presence of PM Narendra Modi, Defence Minister – Rajnath Singh, Home Minister – Amit Singh, along with other council of ministers.