FEGOCTA general secretary Dr N Somorendro said that the teachers planned to carry out the silent rally against the non-implementation of the 7th Pay and Regulations, 2018. 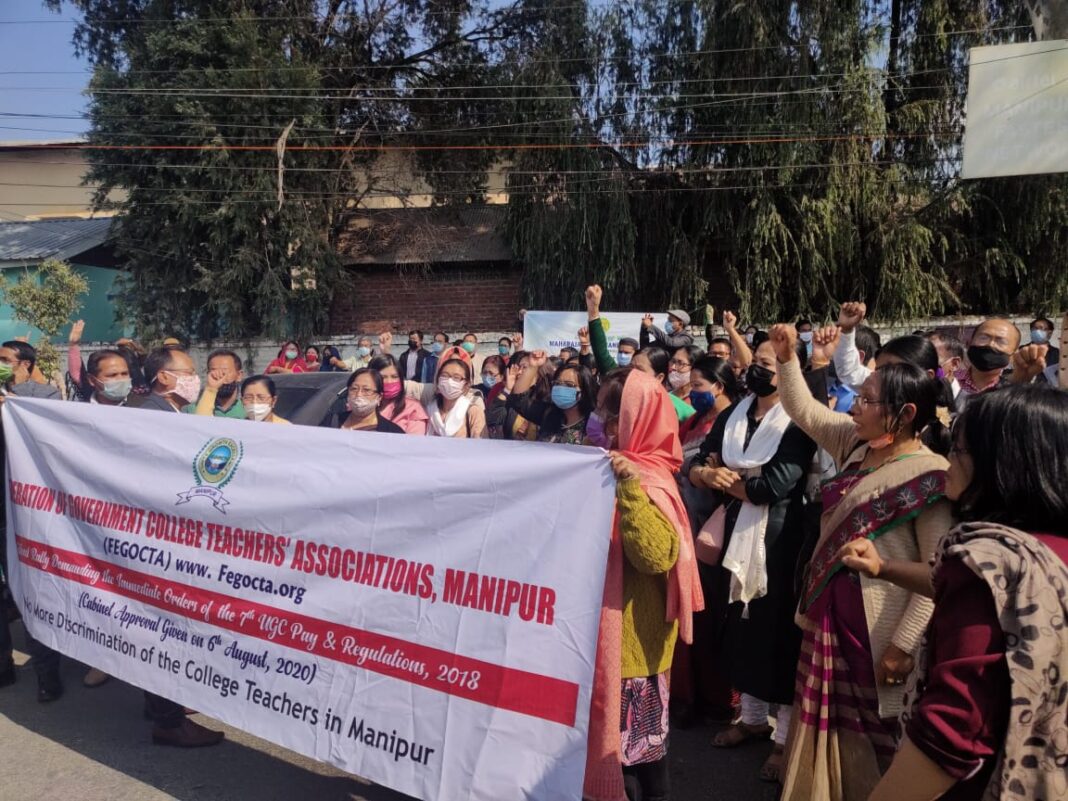 Police on Tuesday foiled a protest rally by agitating teachers of government colleges in Imphal.
The Federation of Government College Teachers’ Association (FEGOCTA) under which the teachers organised the rally strongly condemned the foiling of the rally.

The striking teachers from various colleges converged at Maharaja Budhachandra College in Imphal’s Palace Compound to carry out the silent rally.

As soon as the rally kicked started, a strong police team armed with riot gears arrived there and prevented the teachers from carrying out the rally further. The police pushed them inside the campus of the college without much force. However, the teachers tried to stage a sit-in-protest in front of the college. The same was also foiled by the police.

Talking to reporters, FEGOCTA general secretary Dr N Somorendro said that the teachers planned to carry out the silent rally against the non-implementation of the 7th Pay and Regulations, 2018. He reaffirmed that the teachers will not retreat from the strike until and unless the state government issued necessary orders implementing the national UGC policy. Today’s rally was also organised against the government’s failure to issue orders of 7th UGC and Regulations, 2018, he said.  He then appealed to the state chief minister to address their demands without any delay to restore the normal academic atmosphere in the colleges.

The teachers of colleges under Manipur government were on strike since January 28 with class boycott and cease work strike from February 18 last after the state government failed to meet a January 27 deadline served by them to implement the UGC policy. The college teachers continued the cease work while staging sit-in-protests in their respective colleges.

Meanwhile, the agitating FEGOCTA, in a statement issued on Tuesday, expressed strong condemnation to the “police violence” on the protesting students on Monday.  It stated that the college teachers were on democratic protests against the non-implementation of UGC policy of 7th Pay and Regulations, 2018 and appealed to all to restrain from any kind of violence.

“FEGOCTA’s agitation is not against the students,” it added.

The apex body of government college teachers of the state asserted that if the government is committed in implementing UGC policy and fulfilled the three written assurances to FEGOCTA in 2019, the “unfortunate crisis” would have been avoided.  “FEGOCTA firmly believes that the unprecedented 5th FEGOCTA agitation can be resolved any time, if there is a strong political will,” the statement said.

FEGOCTA demanded stopping blaming college teachers for the violence incident while asserting that the federation was compelled to go for the agitation as the last resort.