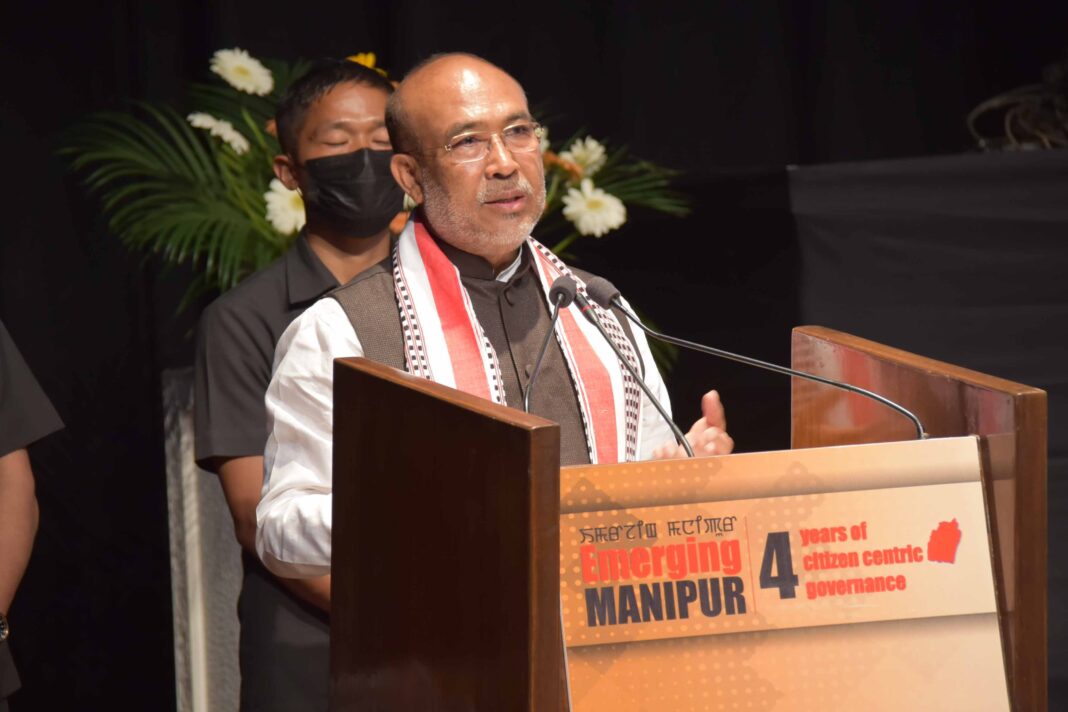 With the completion of four years, the Biren Singh government in Manipur celebrated its “achievements accomplished” during this period in a grand function christened as “Emerging Manipur – Celebration of 4 years of Achievement” held at City Convention Centre in Imphal on Monday.

Inaugurations and dedications of 311 projects worth Rs. 1096.05 crores to public, foundation stone laying of 39 new projects to be taken up at a total estimated cost of Rs. 278.77 crores, video presentation and photo exhibition on the “government’s achievements” and launching of “state-focus” paper on developmental works to be taken up with the assistance from NABARD during 2021-22 were the main highlights of the celebration among others. It may be mentioned that N. Biren Singh led coalition government was sworn-in on March 15, 2017.

Stating that no Government should be anti-people, N. Biren Singh said that the present Government had always been trying to connect with the people by understanding their grievances and respecting their sentiment. That was how they could emerge as a citizen-centric Government within a short span of time, he added. The Chief Minister also appreciated his cabinet colleagues, MLAs and bureaucrat officers for working as a strong team.

He also said that ‘Go to Hills Mission’ could bring various infrastructure developments in the hills bridging the hill-valley gap and bringing emotional integrity. On the other hand, the Chief Minister said, ‘Go to Village’ took the governance to people’s doorsteps covering 2,691 villages less than one year. People to people contact was enhanced with the revival of Manipur State Transport after a gap of 15 years and bus services between Imphal and various hill destinations started, he added.

With the setting up of Anti-Corruption Cell, more than 300 corruption-related cases were taken up and more than 30 Government officials punished, he informed. ‘War on Drugs’ campaign was initiated towards bringing a drug-free society, and it has now become a people’s campaign with people from all walks of life supporting it. Law and order has also improved considerably and police-people relation is also getting better, he added.

The Chief Minister then said that enrolment of students in Government schools had improved with the launch of ‘School Fagathansi’ Mission. Chief Minister’s Scholarship Scheme for Civil Services Coaching was launched for poor and meritorious students, he added. Apart from Chief Minister-gi Hakshelgi Tengbang and Chief Ministergi Sotharabasing-gi Tengbang, the State Government had also hiked pension amount for journalists and launched pension schemes for retired artists and sportspersons, he said. Around 6.75 lakh cards of Ayushman Bharat and CMHT schemes had been issued so far, Biren Singh added.

The Chief Minister also said that condition of Imphal-Jiribam and Imphal-Dimapur highways, which are the lifelines of the State, had improved significantly. Construction of Makru, Barak and Irang bridges are also progressing fast. Start-Up scheme had benefitted many entrepreneurs. 2.11 lakh households had been provided functional tap water connection till date against target 4.51 lakhs households, he added.

Meanwhile, release of Coffee Table Book on “Government’s achievements”, release of district specific e-book, distribution of solar study lanterns to selected students of 16 districts, launching of mobile rural mart and handing over of mobile vans to three Farmer Producer Organizations (FPOs), launching of 11 FPOs in command areas of Thoubal Multipurpose Project, launching of Menstrual Hygiene Scheme and distribution of kits to beneficiaries were other highlights of the celebration. Earlier, the Chief Minister also opened a photo exhibition highlighting achievements of different Government Departments at the ground floor of City Convention Centre.