Forest fire crisis flares up Ukhrul: A fortune worth more than the total economy of Ukhrul is burned to ashes every year

“The setting of forest on fire is punishable under the Damage to Public Property Act, 1984 and relevant Sections of the IPC, besides under the provisions of Indian Forest Act, 1927 and Manipur Forest Rules, 1971.” 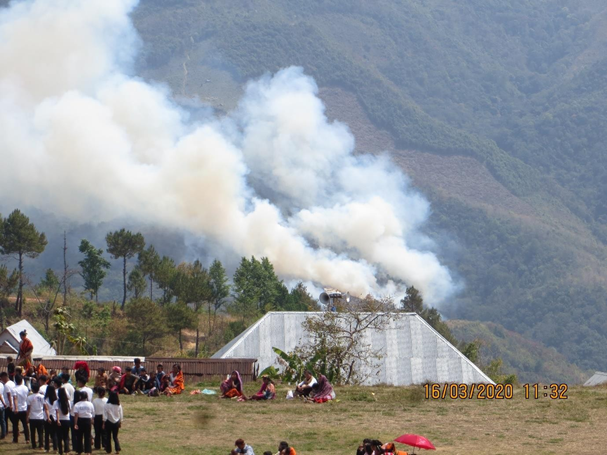 The recent Shirui peak fire has raised an alarm for several groups of people. It ended only after human
intervention and luckily with changing weather conditions on the third day. It lies 5,680-8,500 ft above the sea level and home to the endangered Shirui Lily (Lilium mackliniae), the Manipur state flower. In
1982, It was declared a National park-Siroi National Park. As per our biodiversity documentation using
webtool (Rainforest Biodiversity of Phalee – India Biodiversity Portal), it is a home of many endanger species including white butter cup flowers, Rhododendron spp., Taxus spp., wuyawon (Caulokaempferia secunda), dwarf oak (Quercus semecarpifolia) , dwarf bamboo (Sinarundinariarolloana), Blythe’s tragopan (Tragopan blythii), Coelogyne spp., mainland leopard cat (Prionailurus bengalensis), and threatened medicinal plants, animals, birds, and many unidentified herbs. Apart from the substantial loss of forest patches and biodiversity of the peak, frequent forest fires are also changing the forest structure and composition over the years. The peak is dominated by wild grass (Unidentified), which might play a significant ecological role, the height of which is on average 6-8 feet and it is usually this grassland region that has caught the fire.

No doubt, climate change is affecting global wildfires in different ways such as by increasing the fire
season and size of areas affected. In our case, it is mainly from burning of forest floors to flush out
wild animals and birds, cigarette butt, camping, careless arson, pasture management, jhumming,
charcoal-making in the forests, and few pyromaniacs. Global Forest Watch , a web tool for monitoring
forests, fire, climate, and land, detected a total of 1,794 VIIRS fire alerts between the 23rd of March
2020 and the 22nd of March 2021 from Ukhrul including Kamjong. Despite this fact, rather than acting
preventively and proactively, we react only in the case of an emergency. Accordingly, our ideas and
investment go mainly into technical equipment for direct fire suppression. Despite their soaring costs
and little remedy effect, society widely accepts these measures. In reality, preventive measures would
be much cheaper and more effective in the mid to long term, with numerous synergistic effects for
humans and nature.

Long-term prevention never features in any of our programs except few villages because both forest
fires and associated social promises are quickly forgotten, until some years later another catastrophic
forest fire catches us by surprise. How sure are we that there will be another fire at Shirui? We are
100 % sure there will be another conflagrate fire. “The setting of forest on fire is punishable under the Damage to Public Property Act, 1984 and relevant Sections of the IPC, besides under the provisions of Indian Forest Act, 1927 and Manipur Forest Rules, 1971”, is it really working for us? Our preliminary results of recent surveys using web tools showed that the extent of forest fire in Ukhrul is
significant, though the areas affected fluctuate from year to year. The economic damage and costs of
forest fires are difficult to estimate as it involves nature loss, health, and human livelihoods. Beyond
the direct costs, there can be additional financial implications for the entire region. The size of the
burned area alone gives no information about the damage and the number of people affected. But it
is positive that a fortune worth more than the total economy of Ukhrul is burned to ashes every year.

The total area of the Ukhrul district is 4,544 square kilometers including Kamjong District as per our
Global Forest Watch tool analysis. In 2010, Ukhrul had 380 Kha (Kilo hectare) of natural forest,
extending over 86% of its land area. Forests harbored living and non-living being natural resources
and they have been a major source of food, wood, and a great variety of other products. We rely on
forests for our livelihood. They played important role in our social, economic, and have enriched our
livelihood in a variety of ways both material and psychological. It also acts as a natural barrier to many
pathogens and diseases. In 2020 alone, Ukhrul lost 2.89 Kha of natural forest, equivalent to 1.21 Mt
of CO₂ of emissions. From 2001 to 2020, It lost 37.9 Kha of tree cover, equivalent to a 10% decrease
in tree cover since 2000, and 16.0 Mt of CO₂ emissions. It adversely affects the water balance and
reduces water retention capacity. With the loss of forest, water for the household also gets lost,
consequently severe water scarcity in Ukhrul. Between the 23rd of March 2020 and 22nd of March
2021, Ukhrul experienced a total of 1,794 VIIRS fire alerts (GFW, 2021). However, this information
compares fires from year to year, it detects thermal anomalies including small fires or controlled
agricultural burns.

The effectiveness of our traditional forest and fire management practices appears to have weakened
in recent years, constrained by the dilemma of our society in transition and influenced by modern
lifestyle. The shift from community-based to government-initiated programs highlights the erosion of
community spirit that puts the common good above personal gains. Increased incidences of forest fire
have been overlooked, and our focus is placed on the suppression of already existing and emergency
fires despite many dangerous fire incidents. We should enhance the effectiveness of our Tangkhul Traditional Fire Management, supplement community efforts and encourage maximum community involvement. The relevant stakeholders must involve in fire prevention. Moreover, financial incentives for fire prevention are frequently absent. The contribution of forest owners to preserving forests is often not sufficiently recognized. They are the elementary and the best solution for revitalizing wild areas.

Forest fire spreading over a large forest area in the country causes immense loss to the environment
and the property. The greatest loss is that of endangered and vulnerable plant life, wildlife, orchids,
fungi, insects, and microbes for whom the thick forest acts as a crucial habitat. Ecological, economic,
and social impacts of the forest fire in our region may be enlisted as loss of timber, loss of biodiversity,
loss of the wildlife habitat, global warming, soil erosion and depletion of soil quality, loss of fuelwood
and fodder, damage to water and the other natural resources, loss of natural regeneration, loss of
non-timber forest products, ozone layer depletion, change in micro-climate leading to health
problems, other health problems due to smoke, soil erosion, and floods, loss of livelihood for the
people, etc. Forest fires have been a local issue with global impact, which may happen more frequently
than in the recent past due to the impact of rising temperature and global warming. Slash and burn
(Jhumming) fires generally coincide with the dry and windy months of the year, fires are set every day
in the peak season (Jan-March) and destroyed large sections of forests. Incidences of wanton forest
fires spreading on hillsides and the adjoining forests in Ukhrul are not uncommon and it’s quite natural
to us. Hundreds of acres are burned and destroyed trees, kill and displace wildlife, and endanger the
lives and livelihoods of local communities. The smoke and ash haze hungover for months, reducing
visibility and causing acute health conditions, particularly critical for persons with respiratory and
cardiovascular diseases, as well as for the elderly and small children. It contains toxic substances like
carbon monoxide, fine dust, formaldehyde, and polycyclic aromatic hydrocarbons. It disturbed the bees, one of the most important species of the ecosystem, thereby affecting the honey and wild fruit
production in our region. While several honey waxes melted due to high temperature, the bees too
could not survive in the heat and the bees flew away, affecting the honey harvest. Health hazard,
endangering volunteers. Large-scale fires have affected our region’s water household.

The incidence of forest fires in the country is on the increase and more area is burned each year. About
35 million hectares of forest area is affected by fires of varying intensity and extent annually in India.
A number of 37,059 fires were detected in the year 2018 using MODIS (Moderate Resolution
Imaging Spectro-radiometer) sensor data. Based on the forest inventory records, 54.40% of forests
are exposed to occasional fires, 7.49% to moderately frequent fires, and 2.405 to high incidence
levels while 35.71% of India’s forests have not yet been exposed to fires of any real significance.
There is no precise data of economic loss from a forest fire (Satendra and Kaushik, 2014). In the recent Dzukou valley fire about 200 acres alone were  reduced  to ashes when the fire  was  reportedly  seen (Rini Barman, 2021).

The major cause of failure in forest fire management is the piecemeal approach to the problem. Both
the national focus and the technical resources required for sustaining a systematic forest fire
management program are lacking. Important forest fire management elements like strategic fire
centers, coordination among Ministries, funding, human resource development, fire research, fire
management, and extension programs are missing. Taking into consideration the serious nature of
the problem, it is necessary to make some major improvements in the forest fire management
strategy for the country. Meanwhile, it is convinced that community-based fire management practices
can safely prevent wanton forest fires, which revolve around shifting cultivation practice, a system of
village community governance using traditional fire management tools and techniques rely on timely
community response and participation. These measures include regulatory, activity-oriented,
preventive preparation of fire lines in the jhum fields, penalties for causing forest fires and defines
roles for each organization and members.