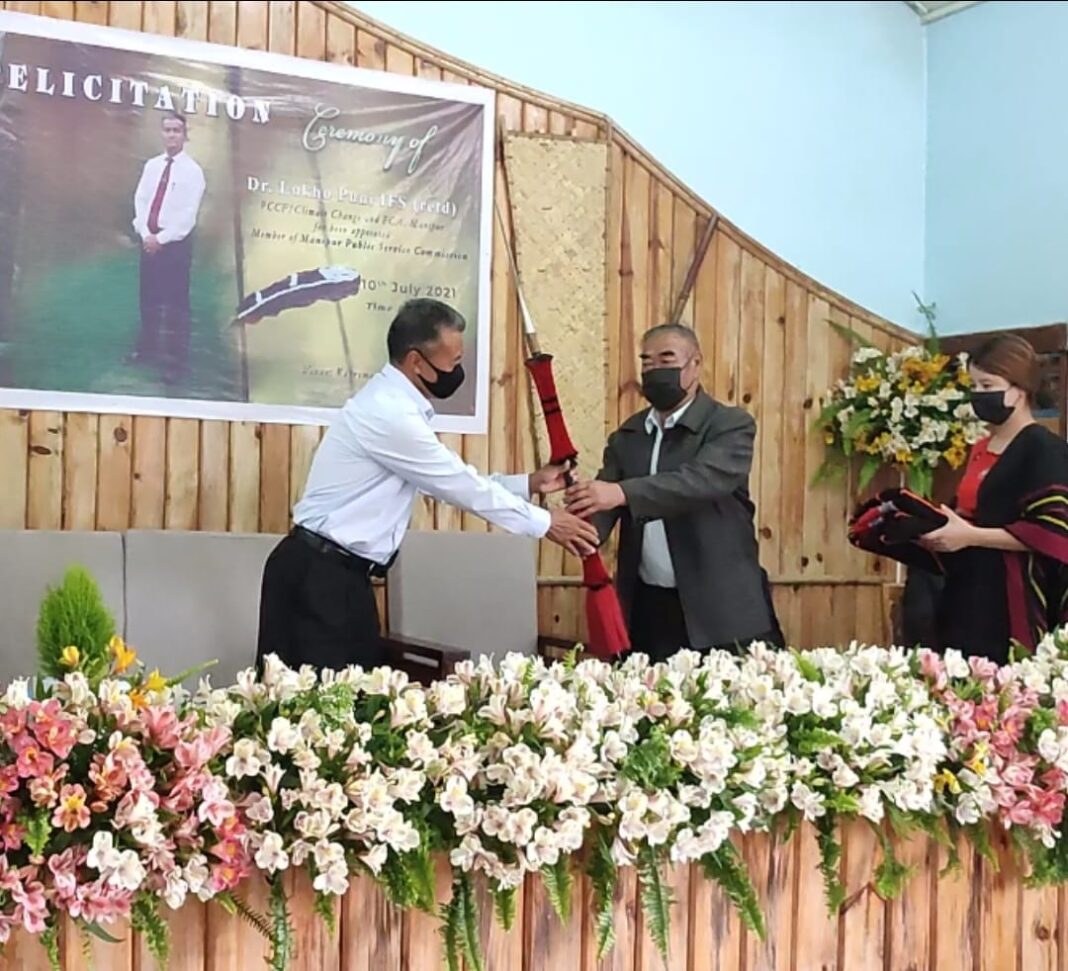 Proving his remarkable contribution and his exemplary years of service and dedications that made him recognised by the people and the Govt, the Kalinamei villagers today felicitated Dr. Lokho Puni, IFS (Retd), former PCCF/Climate Change & FCA, Manipur who is now appointed as Member of the MPSC. The felicitation program was held at Kalinamei Community hall.

Born on January 26, 1963, Dr. Lokho Puni was conferred Indian Forest Service of 1989 batch from Manipur-Tripura cadre. He had earlier served as PCCF/CC & FCA, Member Secretary/MBB, State Mission Director (National Bamboo Mission) in the Forest department, Govt of Manipur; APCCF/Biodiversity and NTFP, APCCF/Working Plan/Res. & Training; Member Secretary/Manipur Biodiversity Board; CCF/Development, CCF/OSD, Forest Research & Training in the state Forest department. He had reportedly attended 24 important trainings/workshops and exposure visits during his active service. He had reportedly published 29 papers and projects completed in his life till date. Dr. Lokho Puni is stated to be the third person from Mao community to be member of the MPSC.

SD. Daiho Mao, President, Mao Council called a happy day to come together and celebrate the success story from the community. The Mao Council also had plans to organise similar programs but was delayed due to the pandemic and lockdown that prevails in the land. Not only for the family, not only for villagers but represents the whole community as to have selected as member of the prestigious post, the President recalls. Quoting from an old saying as “To live a righteous life,” the achievement of the great leader must have been a blessing from his forefathers’ lives in the past, while asking all to live a righteous life fearing God. The President of Mao Council pray to let the life of Dr. Puni be a blessing to all in the service of humanity.

A.Onia, President, Mao Naga Women’s Welfare Association in her message stated that the women association has been longing when they could get this platform to express their profound happiness. The women leader thanked God for the life of Dr Puni and called blessed for the community to have like him. She also expressed gratitude to the lady wife of Dr. Puni for supporting throughout the success of the leader.

Marikho O’Leriina, President, Mao Students Union quoted as “Great thinkers don’t set out to be leaders, they set out to make a difference; they are not born but they are made.” The student leader thanked God for all the great personalities from Mao community and prays that they would be blessed even in future. Marikho also calls the life of Dr. Puni as an inspiration for all the student community and called a challenge for all the students. The life of Dr Puni is a testimony of hard work, perseverance and also dedication that made him recognised by the people and Govt and therefore duly rewarded.

In his speech, Dr. Lokho Puni, IFS (Retd.), Member, MPSC stated that he came up from a very poor background that could not afford square meals in a day and could not afford to buy pair of notebooks even though willing to go for education during his childhood days. The retired IFS officer expressed gratitude for all the blessings in his life since he passed his class X till his retirement. The retired officer had reportedly served as Govt servant for 32 years as he joined the Govt service in 1989. Through lots of concern from the state Govt led by N. Biren Singh as the chief minister, he said that he got appointed as member of the MPSC recently. The newly elected member of the MPSC sought the cooperation of all as he would be given greater responsibilities to look after who ought to pass the state MPSC. Dr Lokho Puni also assured to assist the villagers relating to promotion of forest and preserving the forest in future.