Of the 19.85 lakh people, 18 years and above who are eligible to receive the Covid vaccination shot, 82,027 people have received their second jab. 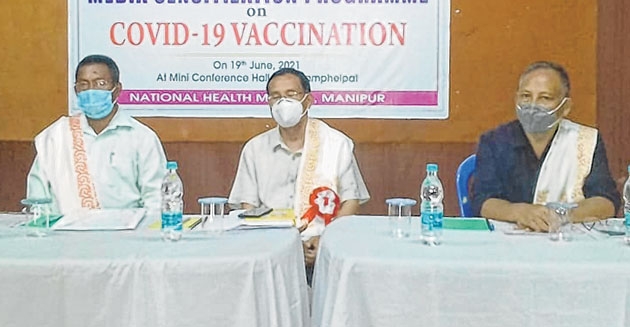 State Mission Director of National Health Mission, Dr N Shyamjai today informed that of the 19.85 lakh people who are eligible to receive the Covid vaccination shot, 82,027 people have received their second jab.

The total number of people who have received their first shot stands at 4,87,571 people.

The Mission Director said this while addressing a media sensitisation programme on COVID-19 Vaccination at the mini-conference hall of the Indian Medical Association.

This is perhaps the first time that an official figure on the number of people who have received their second shots has been spelt out.

The Mission Director said that the total number of people eligible to receive the vaccination (that is people above the age of 18 years) is about 19.85 lakh in Manipur and so far about 25 percent of the targeted population have been vaccinated.

The Mission Director asserted that the objective is to vaccinate all the eligible people as soon as possible.

It is unfortunate that turnout for vaccination in the last few days has been very low for some reasons, said the Mission Director but did not divulge the exact reasons.

If 70 percent of the targeted population gets vaccinated then herd or community immunity will develop, said Dr Shyamjai referring to what experts have said.

The aim is to get all the eligible people vaccinated by December this year, he added.

Today’s media sensitisation programme too has been arranged with an eye on reaching out to as many people as possible by December, added Dr Shyamjai.

Covishield which is being used in Manipur is developed by Astra Zeneca and manufactured by Serum Institute of India, said the doctor and added that the vaccine is absolutely safe and people need not be apprehensive.

However the vaccine may trigger body ache, fever and other discomfort in some rare cases, said the Mission Director and added that even then the death rate is not even 1 in one lakh.

Vaccination is the only way to keep oneself guarded from the virus, said the Mission Director and urged all not to hesitate in taking the vaccine jab.

President Editors’ Guild, Manipur Khogendra Khomdram who attended as one of the presidium members said that the media in Manipur has been at the forefront in sensitising the people on the virus ever since the pandemic hit Manipur.

The media has been keeping the people informed on Covid Appropriate Behaviour, importance of getting oneself tested and vaccinated, but there are times when relevant queries have been not been responded to satisfactorily, he added.

Underlining his point, Khogendra said that the weekly media briefing held every Friday during the first wave has been done away with, without any explanation.

However the media has been stretching itself to deliver the relevant information to the people, he added.

The sensitisation programme, though late, is important and should be taken note of by everyone, added the president of EGM.

Dr Meena Seram who is in charge of testing for Covid, said that till yesterday a total of 8,46,787 samples have been tested and 62,946 samples returned positive results.

More teeth has been given to test more and more people, but the biggest challenge is the reluctance of some people to come forward and get themselves tested, she said.

The co-operation extended by different MLAs, district administrations and local youth clubs in getting the recent mass vaccination exercise done was fruitful, she added.

To give more teeth to the testing done via the RT-PCR mode, a State level meeting has been convened on Monday, said Dr Meena and added that efforts are one to procure a mobile van on PPP model to move from one place to the other to conduct tests via the said method.

Covid Appropriate Behaviour, prompt testing of suspected cases and vaccination are the three most reliable methods to fight the virus, said the doctor.

On the recent confirmation of the Delta variant, which WHO has already declared as a ‘variant of concern’ from amongst 18 samples, Dr Meena said that a further 69 samples have been sent to the Institute of Life Sciences at Bhubaneswar and a report is being awaited.

Preparations are also underway to send another 120 samples from RIMS and JNIMS to the National Institute of Cholera and Enteric Diseases at Kolkata, said Dr Meena further.

Chief Editor of Impact TV Yumnam Rupachandra who also attended as one of the presidium members stressed on the difficult tasks that the media in Manipur is facing in covering Covid related news, more so during the age of social media.