34th commemoration of the Great Battle of Oinam observed

July 9, 1987, the imposition of the “Operation Bluebird” - 27 persons murdered, many more tortured and were denied medical attention as a result of which many died shortly afterward, 2 women were forced give birth in the open in front of jawans and other villagers, raped and forced labour of women folks, dismantling of place of worship and many other unimaginable form of both covert and overt human rights violation continue for 4 months in more than 30 villages in and around Oinam Hill village under Senapati district. 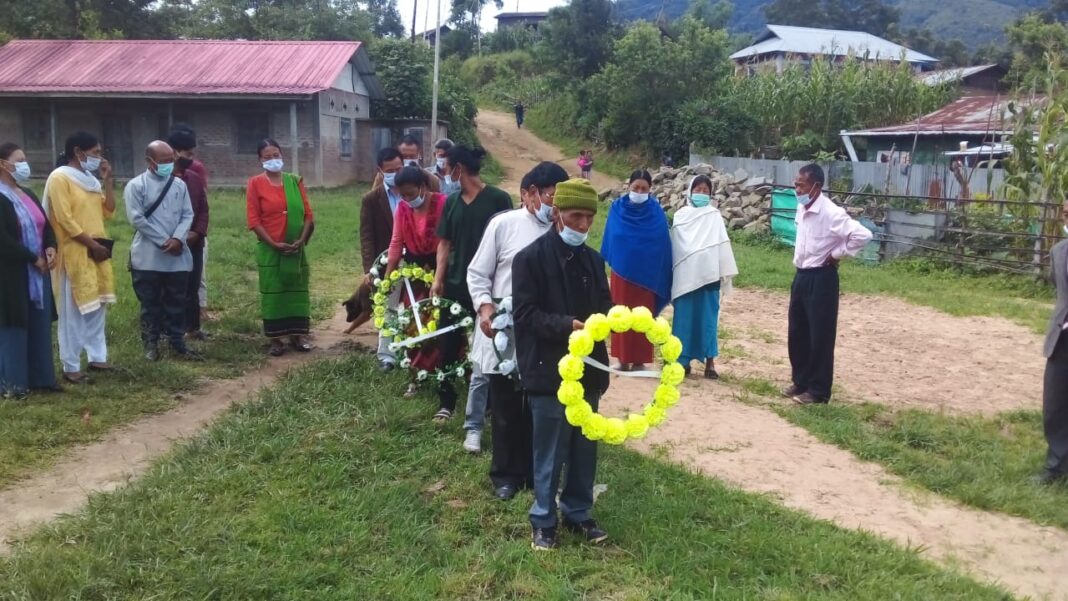 In his keynote address, Joyson Mazamo, Convenor, NPMHR (South) asserted that to stand up and say “NO” to intrusion into the land and oppression is the ultimate choice of the Naga forefathers made. True to their belief, the oppressor has no qualm whatsoever and has left a trail of mayhem and destructions. From choosing a church pulpit to rape the local women to bare their inhuman intent, beheading the local men folks to demonstrate their vengeful savagery and to repeatedly burn down their homes to obliterate the local residents when they knew local people will not relent and be otherwise. People were called “insurgents, militants, misguided ones” and many more names and still feel the people should be placed under sanction and taught a lesson or two to toe their line of thinking and be content with what they think should be good for them.

“Our land has become a glory hunting ground with perpetrators of inhuman act protected and glorified for many decades now. Restricted Area Permit bow (Protected Area Permit) that debars outsiders to venture to our land has been in place thus turning our land to a forbidden one, in other words, ostracised us from the rest of the globe. Sustain military and other offensive campaign (both overt and covert ones) may have caused us momentary disillusionment but in spite of our scars and pain, we have steadfastly held our ground without harbouring any vengeful thoughts and for sure, our unwavering belief in humanity and dream of liberation will guide us through,” the NPMHR convenor recalls.

What happened in the aftermath of July 9, 1987 was the imposition of the “Operation Bluebird” is the continued pursuance of the ill motivated policy (that any Naga is a suspect/enemy and therefore, shall be treated that way) of the preceding years following the occupation of the land. 27 persons murdered, many more tortured and were denied medical attention as a result of which many died shortly afterward, 2 women were forced give birth in the open in front of jawans and other villagers, raped and forced labour of women folks, dismantling of place of worship and many other unimaginable form of both covert and overt human rights violation continue for 4 months in more than 30 villages in and around Oinam Hill village under Senapati district. NPMHR with the support of many likeminded organizations took the matter to court for remedy and justice only to be denied the same till date.

While paying tribute to murdered victims of “Operation Bluebird”, along with the living victims who are still traumatise mentally and physically infirm, the NPMHR convenor urges the Government of India to come clean by dispensing Justice for all victims of Operation Bluebird, repealing Armed forces special powers Act, Scrapping the Protected Area Permit Regime, Restoring peace, a peace that people want and not that is prescribed or imposed and dignity in Nagas Land.

Dr. Rosemary Dziivichu, Co-Convenor, Global Naga Forum (GNF) and Advisor, Naga Mothers Association (NMA) stated that to share the women and mothers who had gone through so much of inhuman suffering along with their men and children. The women leader is depressed to learn that there is no more hearing of the case after 1992 and the last hearing in 2019, which was supposed to be the final hearing without written judgement, a very serious question can be arose to Govt of Manipur and Govt of India which is a challenge to the Nagas where she urged to come together and think in what way to bring justice and in what way to approach the higher court. The fake encounters that took place in Manipur in the past took them courage and united front to go and fight in the Supreme Court where army officers have been charge sheeted for the first time and victims identified as fake encounter victims which is therefore definitely a possibility but not to be depressed to have justice denied. The women leader challenges the Naga leaders that it is time to take together as a family and to go ahead to bring justice at the earliest for the inhuman suffering due to the atrocities. There is nothing more painful than the history of dehumanizing episode to have witnessed during Operation Bluebird which was totally against human rights violations according to United Nations charter of declaration of human rights. It is also against the constitutional and fundamental rights of even citizens who live in India. Therefore, the responsibility lies on the shoulders of the Govt of Manipur and the Govt of India while pleading the case to the United Nations. The Global Naga Forum which consist of professionals cutting across the country and the world stand behind for even helping in taking the case of Oinam Hill further, she asserted. Violations of Human Rights in the Naga areas of similar cases of civilians to have been killed the innocent civilians in cold blood by Assam Rifles in fake encounters are some incidents where the Nagas have not seen justice till date. The women leader urges the Naga CSOs to come together to fight for justice for such violations from army atrocities which could be beginning of Naga unity. However, she lamented of the divisions that had erupted among the Nagas has given in a flux where the younger generation is losing their faith in the working of the present leaders. She appeals from the part of the GNF to continue building fraternity, bonding all Nagas across the border wherever they are and to continue spreading the Naga story in whatever professions one may be.

Atokiho Sumi, Vice President, Naga Students Federation (NSF) in his speech stated his believe to the NPMHR would continue to serve the people and be the guardian of Human Rights in political, social and geographical of the Nagas. In spite of all odds during the pandemic, people gathered to pay homage, respect and honour to the people who have laid down their lives at the altar of democracy during the Operation Bluebird defending the rights and existence as a free people. The student leader asserted that people would remain indebted forever for their supreme sacrifices defending the identity and freedom from any forceful subjugation where their sweat, blood and their tears would continue the younger generation to come.
Kho John, President, United Naga Council (UNC) in his solidarity speech stated that 34 years ago, different personalities had been invited and given speeches on this day. 2 students were shot dead on May 6, 2010 at Mao gate by the state security forces. August 27 of 1948 has been observing on “No Tax Campaign,” or similar incidents meted out to the Nagas in defence of the land and identity. Within 24-25 years of Indo-Naga peace dialogue, 2 small nations got their independence. Kho John regretted that the greatest failure from the part of the Manipur Nagas was for failure to use the service of the elected members in the past. A handful of CSOs together with the revolutionary group shouted at the top of their voices but the mandated leaders/elected group of people who have all the responsibility and status with security turned their face away from the issue when people need them the most. When people are fighting for sovereignty and integration, presence of mandated and elected leaders are not ruled out at this juncture, he observed.
Asha Wungnam, President, Naga Women’s Union (NWU) in her solidarity message stated that the Operation Bluebird took away many precious lives and devastated homes, houses and means of livelihood, animals and nature of the people which are still visible in the society and land. The NWU leader urged all to be united in their struggle and renew the bond of solidarity that empowers communities towards achieving democratic and egalitarian values to build better future for the coming generations.

Wanglar Thiirtung, President, All Naga Students’ Association, Manipur (ANSAM) in his speech expressed their solidarity to all the victims and martyrs with great honour and respect. The student leader mentioned that no sacrifice is too great and no price is too high in the service of motherland.

Solomon Arow, President, Naga People’s Organization (NPO) stated that since submission of memorandum to Simon Commission in 1929 till signing of the Framework Agreement is quite long. A sad moment on the commemoration day because, even after 34 years, all the greatest victory are yet to achieve the target in the history of Naga national movement, he recalls. Instead of fighting with the Naga army, they started taking revenge on the innocent public with different tortures and atrocities. The NPO leader appeals to reaffirm to unite together and march ahead till one’s rights and identity is achieved. The forefathers had given their best to protect the land and territory and it is the time to unite together and fight for the rights and identity in return.