The tournament showcased the spirit of oneness with participation from different communities of the state in promoting peace in the region through sports. 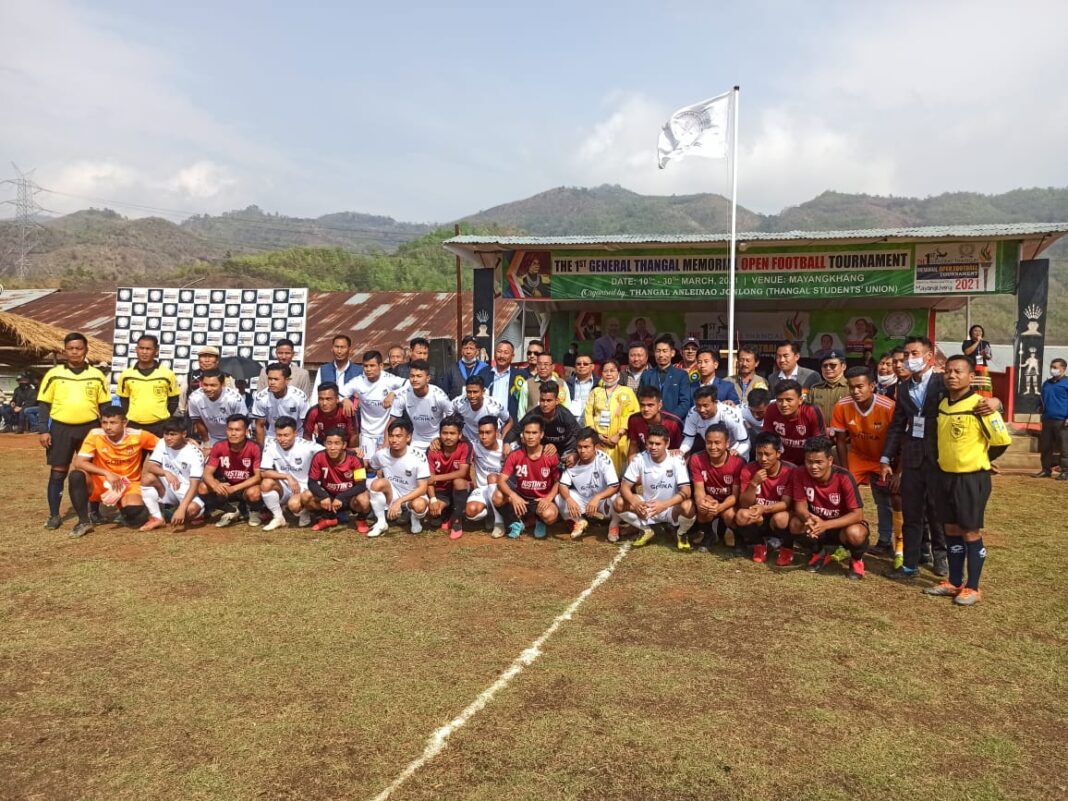 The Hiyai Football Academy bagged the champion at the 1st General Thangal Memorial Open Football Tournament that concluded today. The football tournament that had begun since March 10 last was organised by the Thangal Anleinao Jonlong (TAJ), Thangal Students Union under the theme, “Discipline, Honour & Glory” in memory of the late patriot, General Thangal that was opened by state Chief Minister N. Biren Singh as the chief guest and was participated by 22 teams both from the valley and hill districts of Manipur.

The valedictory function of the tournament was graced by Nemcha Kipgen, MLA, Kangpokpi A/C former minister as the chief guest and H. Khangba, Ex- Member, ADC, Sadar Hills as the guest of honour respectively in the presence of various CSO leaders.

In his presidential address, Meiduipa Thangal, President, TAJ stated that the decision was taken by the executives of the student body to keep alive the legacy of the late freedom fighter who was from the Thangal tribe with dream come true in organising the tournament. With various support of the various CSOs, host village and participating teams, the student leader asserted that the tournament showcased the spirit of oneness with participation from different communities of the state in promoting peace in the region through sports.

Bosco Kashung T., President, Maram Students Union (MKS) in his greetings stated that to win and to lose is a part of the game but the team combination and contribution counts in the game. Unlike other tournaments in the past, the tournament displayed lots of star players of the state where the state is known for producing sportspersons of different games. The student leader expressed gladness to have organised the tournament in a grand manner.

Pung Mark S., President, Senapati District Students Association (SDSA) in his greetings quoted William Shakespeare as there are different stages in life and everyone has different roles to play in life. Recalling the past life of the late patriot, General Thangal is believed to have played a very important role as a player, as a freedom fighter and as a leader. The student leader urged to produce such great leaders from the community like the late patriot.

H. Khangba, Ex- Member, ADC, Sadar Hills stated the importance of oneness through sports. The lone member from the region to ADC, Sadar Hills mentioned that it was the first of its kind to bring together players from the valley and the hills under one platform. Different players from the valley and the hills showcased their skills during the 20 days tournament with national players who are members of ISL players and state level players. Such togetherness could foster love having known each other in bringing peace in the region, he asserted. The tribe leader prays that the land could produce such remarkable leaders in future from the land.

Speaking as the chief guest, Nemcha Kipgen, former minister stated the importance of sports in one’s life which are very crucial part of life. A sportsperson learns various virtues like teamwork, coordination and also helps to keep body fit and healthy. The chief guest mentioned that Manipur could produce many renowned sportspersons even at international level having won different medals and earned different prestigious awards in the field of sports in the past. Some personalities are known for their remarkable performances as footballers, body builders, hockey players, rifle shooters, boxers, athletes, etc. and hope to produce more such players from the state.

The final match of the tournament was played between FC Zalen versus Hiyai FA where the later team won by 2-1 goals after a hard competition during the match. The Best player of the tournament was awarded to Lalminlen of FC Zalen, Highest scorer to Gopi of Hiyai FA with 14 goals, the best goal keeper to Rocky of BosH Lamphel FC and the Best discipline to Tumuyon Khullen Youth Club (TKYC).