There is also possibility of the third wave within 2-3 months time, the CMO stated adding the variant of the virus keeps changing every 11 days and asked all to adhere to maintain SOP. 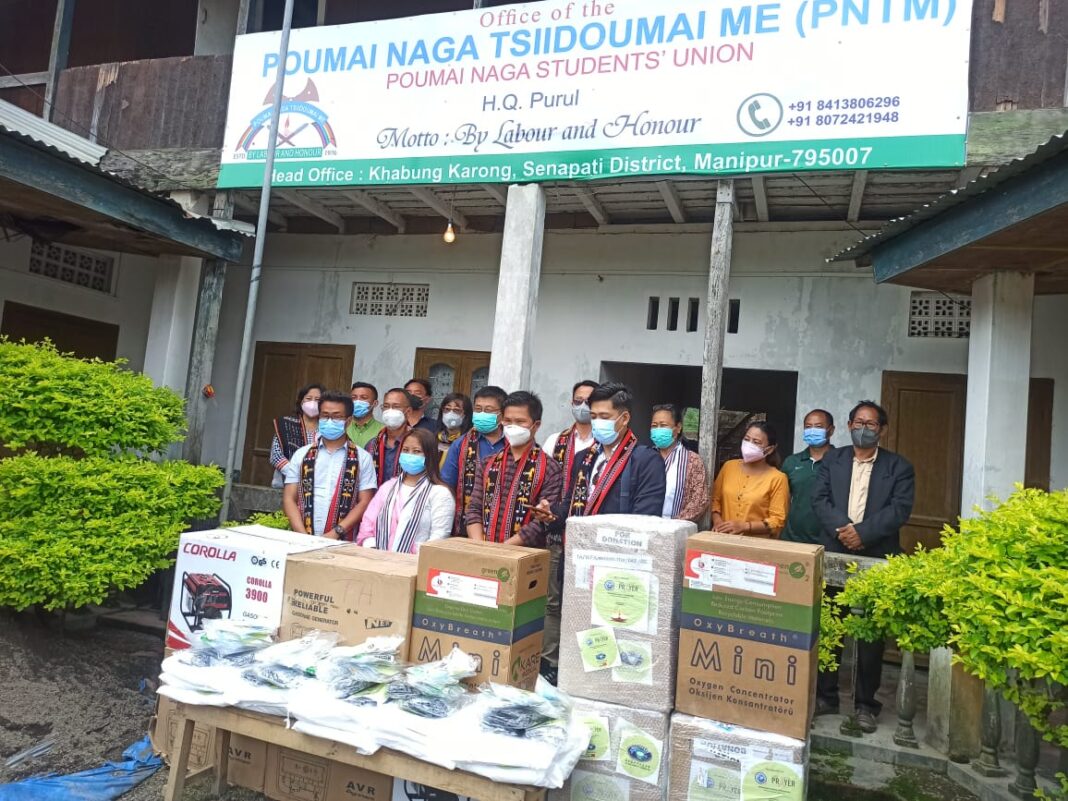 Adding another feather to the medical fraternity operating in the hill, the Poumai Naga Covid Task Force had donated Covid essentials including power backup to 5 PHCs operating in Poumai Naga area.

Addressing the gathering, J. Joyti, Convenor, Poumai Naga Covid Task Force stated that the Poumai Naga Covid Task Force was formed on May 25, 2021 in a joint meeting of the Poumai Naga Union (PNU), Poumai Naga Women’s Union (PNNM) and the Poumai Naga Students Union (PNTM) in view of the emergent need in the region with a sole vision to improve the function of the various health care centres within the jurisdiction of Poumai. With the arrival of the second wave of Covid-19 in the region, the convenor mentioned the urgent need to ensure readiness to fight against the virus in the land. In this connection, team of the Poumai Naga Frontal organizations last visited the PHCs in Poumai jurisdiction and sadly found the different shortages in their infrastructure as well as basic requirements in the functioning of the health centres. In order to support the health centres in the region, the Covid task force reportedly sought donations from other individuals, organizations, churches, villages and subordinates of the PNTM with which, required materials are procured and ready to distribute this day. The task force expressed gratitude to J. Maivio Woba, a prominent social worker who had donated all Oxygen Concentrator, PPE, Hygiene kits and Face masks.

Naga People’s Organisation President, Solomon Arow congratulate the Poumai Naga Covid Task Force for all the arrangements they had made in view of emergent need at this difficult time. The NPO leader also urged all concerned to give importance on proper functioning of the health care centres in the region as they are life giving source.

Adahrii Maheo, ADM, Senapati expressed amazement to witness such huge contribution to the health care centres. Out of different shortcomings in each health institutions, the ADM is hopeful that such equipments could give a boost for effective functioning of the health centres. The ADM also urged all to spread awareness to the people to follow the given SOPs which is the only way to get to normalcy who sought cooperation of all to fight against the pandemic.

Dr. Pfokreho Pfoze, CMO, Senapati mentioned that there are 55 positive cases in the district at present with 51 patients on home isolation scheduled for 17 days. There is also possibility of the third wave within 2-3 months time, the CMO stated adding the variant of the virus keeps changing every 11 days and asked all to adhere to maintain SOP. The second weapon to contain the spread of the virus is to vaccinate with Covishield. Unless 60-70% of the total population are vaccinated, one cannot develop the hard immunity. The seriousness of the disease can be prevented with higher rate of vaccination, he said asking the Poumai Naga Covid Task Force to spread this message. The district medical department has recently formed mobile vaccination team where they are ready to go to any village even to the interior one in the district who could not afford to come to Senapati for vaccination. The day is stated to organise mobile vaccination at Sangkumei for people of the surrounding villages as requested by the villagers. Although the vaccination is voluntary, the CMO explained that when one is vaccinated, the virus cannot multiply within that person with lesser severity inside and minimal transmission to other.

The CMO expressed gratitude for the concern the Poumai frontal organizations have for people of the region by stepping forward in the form of valuable gifts. The CMO further requests all medical staff to be vigilant and be stationed t their own posting during this hard time.

D. Dailord Pao, President, PNU on behalf of the Covid Task Force expressed gratitude to all contributors who had contributed individually, villages, societies, churches and all who had made the mission a grand success. While appreciating the sacrifices in the service to save lives, MOs in charge of the PHCs were also requested to give their best effort to save lives at their own health institutions in the later part of the program. Earlier, the Poumai Naga Officers Federation (PNOF) had donated a 33 kv generator to the District Hospital, Senapati where lots of inconveniences occur when light went off in the past.

One each of oxygen concentrator and generator, PPE kits and FaceMasks were distributed to MO in charge of PHC, Oinam Hill, PHC, Khongdei, PHC, Phaibung, PHC, Laii and PHC, Paomata. First aid medicines and other essential medical tablets for each PHC was also given in view of the necessities for each healthcare centre.