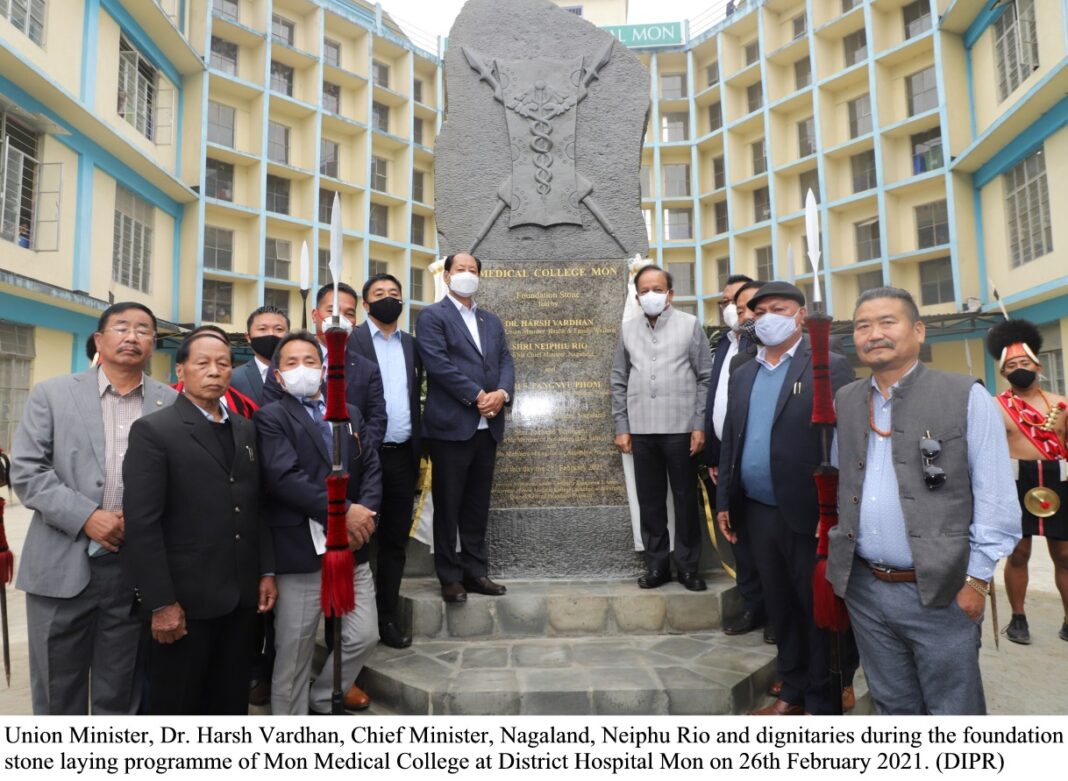 Union Minister of Health & Family Welfare, Science and Technology and Earth Sciences, Government of India, Dr. Harsh Vardhan said that, as part of Narendra Modi’s cabinet, he has seen how committed the Prime Minister is for the people of North East and that “hardly any meeting concludes without the Prime Minister raising concern for the development of North East region”.

The Union minister said this while laying the foundation stone of Mon Medical College at District Hospital Mon in Nagaland on Friday.

The laying of the foundation stone shows the commitment of the Government to ensure that the people of the most remote and interior parts of the country are not deprived of development, he added. He stated that the Prime Minister has a huge mission for the country, to make changes in all fields. He further stated that India is fortunate to have such a dynamic leader who monitors each and every mission and programme himself.

He then congratulated Nagaland Chief Minister Neiphiu Rio and Minister of Health and Family Welfare S Pangnyu Phom for the proactive steps taken towards bringing the project into reality.

The Minister further stated that in 5 to 6 years, the Government has been able to increase the number of MBBS seats from 50,000 to 80,000 and 20,000 more Post Graduate seats. He also stated that 1,50,000 Health and Wellness Centres (HWC)  are in process of development across the country with 370 such HWCs under progress in Nagaland. He also urged upon the people and the State Government to ensure that all the poor are covered under Ayushman Bharat. He stated that the Centre’s assurance of support to Nagaland and North East was not just in theory but out of pure intention and concern for the region.

The Minister also took time to highlight the great work done by Covid warriors who risked their own lives for the safety of all. He stated that because of the contribution of Covid warriors, India has the highest recovery rate and the lowest death rate. He also appreciated the ASHA workers and urged upon the Government to provide full support to such grassroots field workers. The Minister stated that he along with all the Health Ministers and the PM along with all the CMs worked together with utmost diligence to tackle the Covid crisis. He further acknowledged the State Government for tackling the crisis appropriately.

He also expressed his vision to eliminate Tuberculosis (TB) from the country by 2025 which is 5 years prior to the global goal 2030. “India despite being a big country, if we could eliminate Smallpox and Polio, if India could survive Covid-19, we can definitely eliminate TB by 2025”, the Minister added. He further urged upon the CM to make a commitment to eliminate TB in the State much before 2025. The Minister also spoke about the problem of maternal mortality and urged upon the Government to reduce the maternal mortality rate. “Pregnancy is a boon and not a curse”, he added.

He also expressed desire for India to be the first nation to achieve the goal of health for all. He further appealed upon the people and children of Mon to contribute towards the realisation of the dream of the Prime Minister for a new India by 2022 when India celebrates its 75th Independence Day.

“A new India where there is a smile in all faces, where the children are safe and secure, where dignity of women is valued, where senior citizens are taken care of and proper healthcare for the poor is available, a country filled with humanism and nationalism”, he added.