The Naga people from the entire Naga areas comprising of all the Tribe Hohos, Apex Civil Society Organisations - Naga Hoho, Naga Students’ Federation, Naga Mother’s Association, Eastern Naga Peoples’ Organization and United Naga Council; and Church leaders, have unanimously given their mandate to the NSCN to negotiate with the Government of India for an honourable and acceptable solution on 21st January 2005 at Hebron Camp, Dimapur. 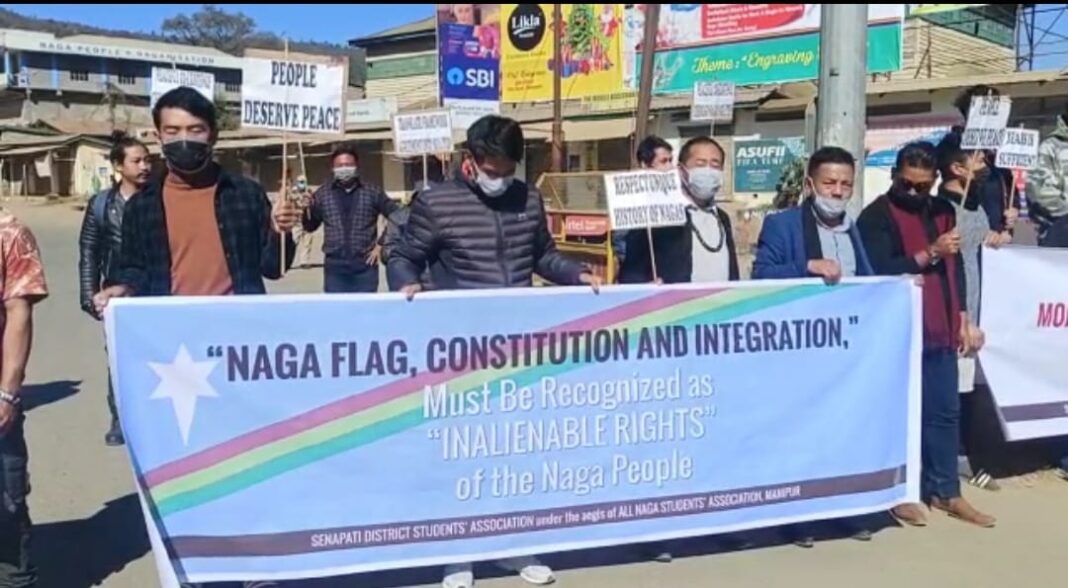 The Senapati District Students Association (SDSA) under the aegis of the All Naga Students Association, Manipur (ANSAM) took out to streets in welcoming the arrival of the Union home minister to Manipur. Similar program was held in all four Naga hill districts in Ukhrul, Tamenglong and Chandel.

Banners written with “23 years of negotiation and 5 Prime Ministers is enough to merit honourable solution, Let’s give durable peace a chance, Naga flag, constitution and integration must be recognised as inalienable rights of the Naga People, More than 7 decades old Naga Movement deserves honourable solution, We welcome the peace visit of Shri Amit Shah, Union Home Minister, Govt of India and Govt of India should focus on one mutually negotiated solution and not on imposed solution” were held while placards written with “Respect unique history of Nagas, Settle Indo-Naga issue for peace and dignity, Naga solution for peaceful co-existence, Naga solution must be honourable and acceptable, Resolve political conflict with honour and We support Naga Framework Agreement” were held during a short gathering of the district student leaders at Traffic point, Senapati.

While extending a warm welcome to the historic visit of Amit Shah to the state of Manipur, the All Naga
Students’ Association Manipur (ANSAM), the apex organization of all Naga students in Manipur state apprised the union home ministry for a logical conclusion of the protracted Indo-Naga Peace Talk.

In a press release issued by ANSAM expressed their appreciation to all the former Prime Ministers of India who have made sincere efforts towards resolving the Indo-Naga Political Issue. The unprecedented
recognition of the “Unique history and situation of the Nagas” by the Government of India under the leadership of the then Prime Minister of India, Atal Bihari Vajpayee in the year 2002 demonstrated the seriousness and genuine concern for settlement of the protracted violent conflicts in the Indian Sub-continent and stands as a landmark in the peace process, it stated.

The Naga People wholeheartedly welcome and endorse the 3rd August 2015 Framework Agreement between the Government of India and National Socialist Council of Nagaland that signed ceremoniously in the presence of Narendra Modi, Prime Minister at New Delhi. It gave the Nagas high hopes for an early and logical settlement of the Indo-Naga issue.

The Naga people from the entire Naga areas comprising of all the Tribe Hohos, Apex Civil Society Organisations – Naga Hoho, Naga Students’ Federation, Naga Mother’s Association, Eastern
Naga Peoples’ Organization and United Naga Council; and Church leaders, have unanimously
given their mandate to the NSCN to negotiate with the Government of India for an honourable
and acceptable solution on 21st January 2005 at Hebron Camp, Dimapur. Presently, the Naga
people are eagerly waiting for the wholesome and inclusive political solution for the entire
Nagas living in contiguous Naga areas, the press release stated signed by Thiirtung Wanglar,
President, ANSAM and AC. Thotso, General Secretary, ANSAM. The ANSAM strongly emphasized that it was the realization of the “political nature” of the Naga issue on the part of India that paved the way for negotiation. The 23 years of political talk demands a logical conclusion with due recognition of “NAGA FLAG, CONSTITUTION AND INTEGRATION” as their “INALIENABLE RIGHTS.” Any agreement without
ensuring these will not address the political aspirations of the Nagas as a people.

Solution to the protracted Indo-Naga issue must of necessity be inclusive, honourable and acceptable, and based on the unique Naga History and its situations. It should not be subjected to the misplaced and concocted sentiments drummed up against the peace process by some communities in the state of Manipur or by those in the neighbouring states. This is for the simple reason that Nagas do not claim even an inch of land that lie outside the clearly defined ancestral domain nor do the Nagas object to the legitimate rights and aspirations of neighbouring communities and states. The statement stated that the ANSAM also would like to assert that the Government of India must focus on one ‘mutually negotiated solution’ and discard any exploration for piece meals‘ imposed solutions’, which will not serve the end of lasting peace, it mentioned.

Taking this opportunity, the student body appeals to the good office for immediate cessation of all military
campaigns and political witch-hunt against the Naga leaders, human rights activists and national workers which is contrary to the spirit of the Cease-fire and Peace Talk and of vital importance for creating the congenial environment, necessary for the impending settlement of the Indo-Naga issue while the student body has high hopes and confidence in the dynamic and decisive leadership.