“I believe lndian leaders today will not commit the mistakes of the past. For the Nagas, we survive if we hold fast to the issue, but we perish if we drop it”. 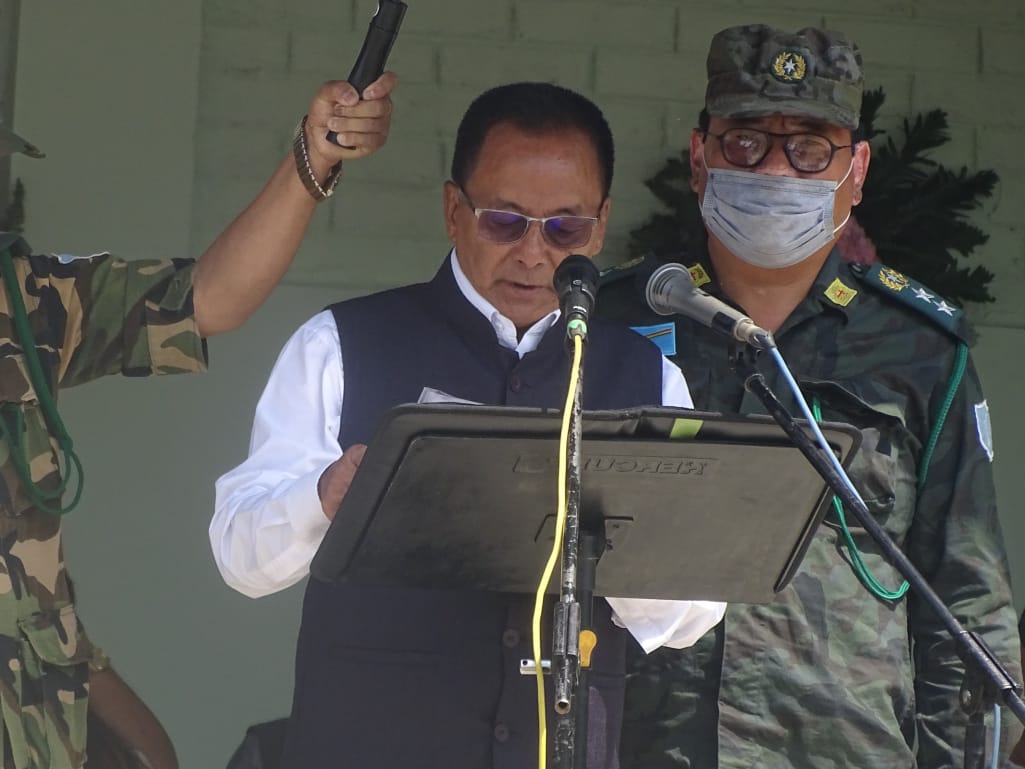 NSCN-IM chairman, Q Tuccu said on Sunday that the Government of India must not repeat the “wrong colonial carrot and stick policy.” He also said that colonialism is a thing of the past already condemned by the world today. Q Tuccu further said that lndian leaders admitted that the so-called 16-point agreement and the Shillong Accord did not solve the problem. “That is why the government of lndia invited the NSCN leadership to have political dialogue with them for a lasting political solution,” stated Q Tuccu, adding, “But we can assuredly say any agreement that is not based on the issue is no solution at all”.

This was the speech of the NSCN-IM chairman on the 42nd Republic Day anniversary of the organization.

Q Tuccu then said, “I believe lndian leaders today will not commit the mistakes of the past. For the Nagas, we survive if we hold fast to the issue, but we perish if we drop it”.

The NSCN-IM leader then said, “History says Naga country is composed of thousands of sovereign independent village-states which were ruled by councils of elders headed by kings”. He added, “But their independent and peaceful life was threatened when the British colonial forces intruded into the Iand of the free Nagas”. Q Tuccu also said that the Naga people felt the necessity of forming a united force under the banner of one national government and organization to confronting the aggressors in defense of their land. “So, the birth of a republic government was necessitated,” he stated.

According to Tuccu, the Republic government called Federal Government of Nagaland was formed on March 22, 1956. “But its legitimacy ceased with the signing of the Shillong Accord in 1975. Thus, the second Republic government called Government of the People’s Republic of Nagalim was formed and declared on this day, March 21, 1980,” stated Q Tuccu. He further said that change of government from monarchy to Republic is historic. He added that Republic is the rule of the sovereign people through their elected representatives where voice of the people is supreme.

Q Tuccu then said that in the negotiations, the lndians and the Nagas leaders took their respective parallel stands never to meet. He also said that the stand of Government of India was – ‘solution within the parameter of lndian constitution and Union of lndia’ whereas the stand of the Nagas was – ‘nothing to do with lndia, nothing short of total independence and total sovereignty.’ He added, “Finally, after a long series of talks the Government of lndia proposed the Framework Agreement as a formula of win/win solution,” Tuccu said. All the successive Prime Ministers of lndia understand that Nagas will not merge with Union of lndia, but they are willing to coexist with Union of lndia, he also said. They are also well informed of it that Nagas will not accept Indian constitution, Tuccu also said. “However, they are not opposed to sharing sovereign power with lndia. The Framework Agreement is the meeting point of the two sovereign peoples,” the NSCN-IM leader stated.

Q Tuccu then said that sensible Nagas understand that this is one of the options where the lndians and the Nagas can come closer to each other because it serves the purposes of both the parties. “And therefore, it would be a great loss for them if they would betray the Framework Agreement or miss the chance. But as for the Nagas, we will keep the Framework Agreement,” he added.

Tuccu then said, “We don’t believe in the philosophy of stopping war with war”. He stated that all wars in history and all human problems are settled with the politics of negotiation and agreement. “We believe the lndo-Naga political problem can also be settled through political talks. We strongly believe lndians and Nagas can walk together, work together, live together and fight together through agreement both in the time of peace and war,” he added.

The NSCN-IM leader then said, “We have understood the fact that lndo-Naga political solution will not come from the east or from the west, it will come only from the bilateral talks between the Nagas and lndian leaders,” adding, “And therefore, we reiterate our stand on the negotiated settlement”.

Tuccu also said that Nagas are highly political people. “We are issue-based people; we are principle[1]based people who can never be lured and purchased with quantum of money or high sounding promises,” he added.