"Naga Political leaders are prepared to work towards a shared Naga future based on the foundation of Naga historical and political rights, and any interim arrangements of the political rights of the Nagas shall be outside the purview of the Indian Constitution per se”. 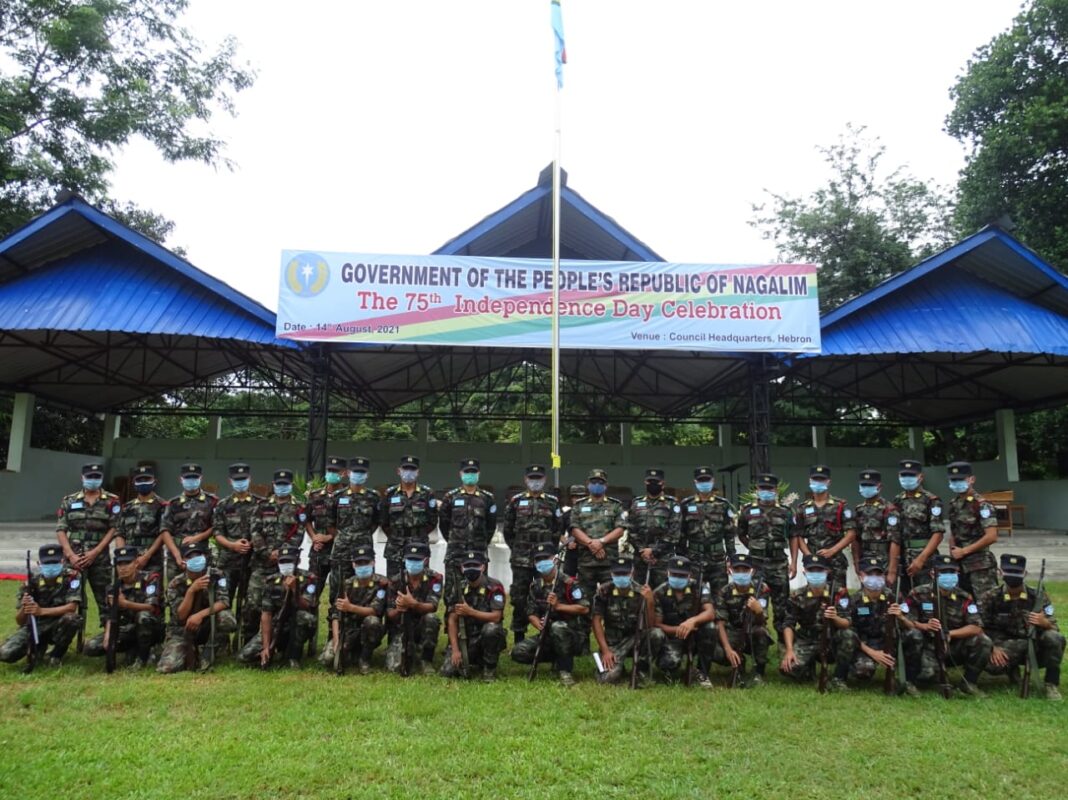 Speech of His Excellency, the Yaruiwo of the Government of the People’s Republic of Nagalim (GPRN) on the 75th Naga Independence Day Celebration on the 14th August, 2021

My dear comrades and people of Nagalim!

On this historic Naga Independence Day, I have the pleasure to greet you all in the name of  our Almighty God.

We are proud of our history and the determined leadership of our pioneers who dauntlessly handled the Naga political struggle against all odds. It was on this  day  the 14th  August, 1947, one day before India got independence that the Nagas declared independence before  the  world. Going beyond that, our leaders put on record before the world. The declaration was sent to the King George VI of England, the Government of India and to the Secretary General of the United Nations Organisation (UNO). It was to deliver the message that the Nagas will decide  their own political destiny. No wonder Naga people were never a part of Indian Union.

My dear Naga people, we have come a long way defending  our  historical and political rights. It  is a story of martyrs with hundreds of thousands gone down the graves as they defied death to assert their right to independent existence. May I remind you that till 1995  we  stood  our ground as the Government of India (GoI) made a disastrous attempt to solve the Naga political issue by forcing the infamous 16-Points Agreement and Shillong Accord upon the Naga people. However, realising the utter failure of the 16-Points Agreement and Shillong Accord and the futility of dragging the Naga issue, a time came when the then Prime Minister of India Mr. PV Narasimha Rao approached the NSCN Collective Leadership abroad on June 12, 1995 in Paris to offer olive branch. It turned out to be a ground breaking meeting. Two years later it was Prime Minister Mr. HD Deve Gowda’s turn who met Isak and Muivah on the 3rd February, 1997, in Zurich. Finally, it resulted in signing the historic Indo-Naga Ceasefire on the 25th July, 1997, followed by numerous rounds of Indo-Naga political talks passing through five successive Prime Ministers of India.

Ironically, to solve the political issue of Indo-Naga political magnitude, correct and sincere approach has been ever more elusive. The 16-Points Agreement and Shillong Accord met its damnation as it is not supported by the historical and political rights of the Nagas. It was repulsive and treacherous in nature and defiant in execution.

NSCN is keeping a wary eye on the Government of India since its representatives pointed out  that we are being too rigid in our stand. However, in reality it is the other way round  of repeating the same policy of shifting blames than taking responsibility. It pertains to GoI not respecting the rights of the Naga people. We cannot go on talking with the Government of India to suit its own convenience by dabbling with the legitimate rights of the Naga people. Had the Nagas been too rigid the Indo-Naga political talks would not have lasted this far. Defending the rights of the Nagas that are bona fide cannot be wrongly interpreted as  being  too rigid.  We have exhibited flexibility and spirit of understanding in a very sensible manner by appreciating the difficulties of the Government of India.

Flexibility may be considered as political urgency to hasten the process of  negotiation.  But in  the case of Naga political issue we have to draw the line as it matters safeguarding the identity  of Naga people’s historical and political rights. The Government of India must show reciprocal sensitivity in the spirit of accommodating the legitimate rights of the Nagas. The Nagas cannot, however, go beyond the limit as it is the bounden duty of the Naga people to protect the  sanctity of Naga political issue that our forefathers have faithfully withstood  at the cost of blood, sweat and tears. For the sake of exercising flexibility the Nagas cannot forego the Naga National Flag and Yehzabo (Constitution). NSCN cannot do such abominable thing before our Almighty God and before our Naga people.

In what can be construed as unfortunate turn of irony is that some sections of the Nagas are awed at the coaxing call of the Government of India as gospel truth. This is too big a shame for the Nagas to be  manoeuvred. We should not lower down our guard defending our historical  and political identity, come what may!

Pan Naga Hoho which must constitute as an integral part of the Naga solution should be given the thoughtful consideration it deserves. But to denigrate the Pan Naga Hoho is as good as insulting our own political identity. Significantly, while negotiating for our political rights we cannot belittle ourselves by foregoing nationhood and accepting statehood. This will be tantamount to selling out our God’s given political identity as a nation.

With regard to the crucial issue of reconciliation and unity, it is critically important to look back on the June 10th 2009, Chiangmai, Naga Covenant of Reconciliation and Unity signed by late (L) Chishi Swu, (L) SS Khaplang and S. Singnya. The covenant stated that Nagas have to forgive each other and have agreed that reconciliation and unity shall be obtained on the basis of historical and political rights of the Nagas.

Significantly, as a follow up, FNR (Forum for Naga Reconciliation) relentlessly pursued Naga reconciliation and unity in the following years. Let us recall the five days reconciliation program, “Reconciled for a Shared Naga Future” from August 20 to August 26, 2011 in Dimapur. The two outstanding agreements among others are: Naga Political leaders are prepared to work  towards a shared Naga future based on the foundation of Naga historical and political rights, and any interim arrangements of the political rights of the Nagas shall be outside the purview of the Indian Constitution per se”.

My dear brothers and sisters and friends, these top Naga leaders  have declared  before the  Naga people that they have reconciled before God and fellow human beings  to  understand  each other and work towards a shared Naga future on the foundation of our historical and political rights. Naga political groups should avoid duplicitous characters but boldly go for the transparent honesty, tempered by sagacity in order to achieve forward looking reconciliation  and unity.

My dear countrymen, it is unfortunate to point out that the process of  Naga  solution  has passed the expected timeline. But it is not the NSCN that is at fault, delaying the process. Nor NSCN has ever or tried to change the goal post. It is for the Government of India to examine the urgency of working out all the details of the Framework Agreement it has signed with NSCN on the 3rd August, 2015 and act on it at the earliest without tampering a single word. What has  been signed with much fanfare before the world view should be pushed forward in letter and spirit. There is no other way forward. The Government of India need to prove before the world its credibility in handling the Indo-Naga political issue that had hung on for too long.

On this auspicious occasion let us remind ourselves the precarious economic state of affairs. Let us not be comfortable by being too dependent on others to get sustenance for our survivor.  Time has come that we activate ourselves to do away with spoon fed attitude and learn to diversify our own means of economic activities. How long we Naga people are going to go on depending on the budgetary sanction from the Government of India? We  should not reconcile  to this conservative mentality. We need to strengthen our economic base in order to make a meaning of our political struggle. It would be prudent to encourage our students to go for productive line of scientific and technological courses with highest dividends generating money and thereby, doing away with begging bowl habits. This is the worrying trend that needs to change.

It is a painful reality that Naga people including NSCN and Nagaland state government are  deeply buried in multifarious nature of corruption deeply seated in all hierarchy. This  has  blinded them from the real issue that the Naga people are confronted with. This is all the more disgraceful for the Naga people who rallied under the banner of “Nagalim for Christ.” This is an

insult to God. It is however, never too late to correct ourselves. Naga leaders must pull up the socks to put themselves on the right track because so much is at stake for the Naga people.

It is a matter of heavy irony that in the NSCN set up, both Army and Civil; the standard of discipline has been steadily compromised. This disease-like indiscipline is worrisome to say the least. Be it individuals, as well as nations, when they are reduced to indiscipline the painful results will hit us hard driving us away from achieving anything good. It is the discipline that drives the nation. In respect of NSCN, discipline requires perseverance, self-denial, hard work, sacrifice, dedication and respect of authority. It is the discipline that trains us to operate by principle rather than desire. Self-discipline demands that we do away with frustration, disappointment and selfishness in the service of the nation. We must push ourselves to  the limits of our will and endurance in order to prove ourselves as true soldiers of Christ and Naga nation. No achievement or goal can be realized without self-discipline.

Our lands are rich in mineral resources. It is a proven fact that we are sitting in a highly valued mineral belt. We have petroleum, coal, chromites, limestone, etc. We only need to exploit the huge economic potential at our disposal  and develop our  human resources accordingly. God  has given the Naga country not barren land but very rich land interspersed with fertile valleys and forested mountains with warm and temperate climate.

Let us not put plants and animals including water based species in a vulnerable state. We must safeguard biodiversity to ensure sustenance for generations to come. It is time that we put a  stop to reckless exploitation of our land, rivers and forests. It is time to say good bye to use of chemical  fertilisers, weedycides, germicides, etc. in order to repair and restore the beauty of   our land.

The Naga people have proven their valour in military front and at the same time stood the ground robustly defending their God’s given political rights. This is the reason why we have carried the struggle this far. The world is the witness and in recognition of our historical and political legitimacy NSCN planted Nagalim map among the UNPO’s (Unrepresented Nations and Peoples Organization) 44 bona fide members.

We have to admit that Naga nation need to have good neighbourly relation. No nation can survive on its own. Inter-dependent relationship is the system of international diplomatic relationship. The relationship between India and Nagas on the basis of peaceful coexistence must be established to a meaningful level to benefit each other. We can never do away with each other. That is the political meaning in signing the Framework Agreement to protect our sovereign identity. Fulfilling the commitment towards executing the FA details will give us the solution that is honourable and acceptable to both the Naga people and Government of India.